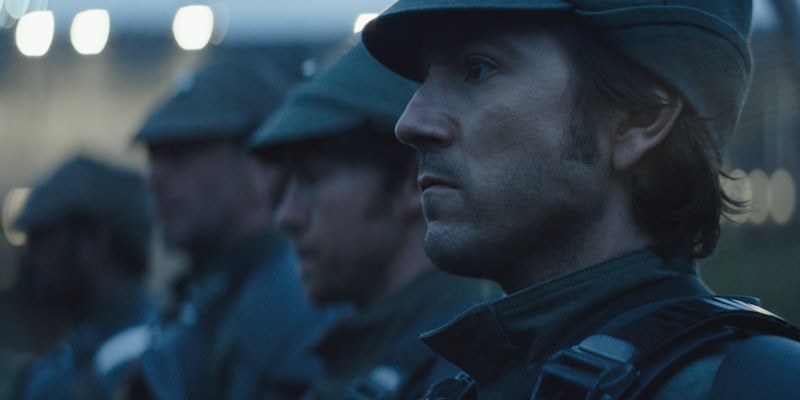 This heist episode is a masterclass in dramatic tension, delivering a 45-minute thriller to rival 'Rogue One.'

This post includes spoilers for Andor episode 6, “The Eye.”

It’s interesting to watch Andor and The Rings of Power concurrently. Both are prequels to larger works, featuring storylines and character arcs that lead into preordained events. However, there’s a stark difference in their ability to build dramatic tension, as proven by this week’s nail-biting episode of Andor.

In The Rings of Power (I promise I’ll get back to Andor in a moment!), the stakes are world-endingly high yet emotionally underwhelming. The main characters are oddly impervious to harm, quickly bouncing back from life-threatening injuries and personal conflicts. Also, many of the setpieces and emotional cues rely upon the audience’s nostalgia for the Lord of the Rings movies. For instance, one subplot raises the idea that the elves could lose their immortality, something we already know won’t happen. Since the show never depicts this as a tangible threat, it only “matters” in the sense that it creates conflict between Elrond and his dwarvish friend Durin—a friendship that’s clearly modeled on Legolas and Gimli. It doesn’t function as a standalone drama.

By contrast, Andor understands how to keep viewers on the edge of their seats. The writing and direction evoke a more realistic sense of danger, emphasizing the vulnerability of the lead characters. Tragedies happen due to random happenstance and human error, and people’s motivations are never exactly what they seem. Even relatively minor characters feel like fully-realized people, which is why their moral choices carry so much weight.

Episode 6 covers the rebel attack on the Aldhani Imperial base—a mission that’s part heist, part terrorist attack. There are numerous moving parts here, any one of which could go wrong. When disaster strikes, it comes in different forms: Slow-burn, foreshadowed threats (an Imperial officer noticing that the base’s comms are down), and unpredictable shocks (Nemik being crushed by equipment in the getaway ship).

The final surprise is a bitter twist. As the surviving rebels flee Aldhani, Arvel Skeen suggests that they make a stop so Nemik can see a doctor. But this turns out to be a ruse, with Skeen using this pit-stop to suggest a double-cross to Cassian. He wants to steal the ship’s lucrative cargo while Vel and Nemik are with the doctor, betraying the entire purpose of the mission.

For a moment, we wonder if Cassian will take the bait. Then he shoots Skeen dead. Cassian may not be a die-hard rebel yet, but he does have some moral backbone. Skeen also failed to understand that Cassian would see this as a personal betrayal. In an earlier episode, Skeen bonded with Cassian by explaining how the Empire colonized his homeworld, resulting in his brother’s suicide. This story echoes Cassian’s childhood, and when Skeen revealed that it was a lie, he destroyed any sense of fellow-feeling. Skeen’s mistake was assuming that Cassian was just as selfish and cynical as himself.

In some ways, this episode is just a grittier version of other rebel missions we’ve seen throughout the franchise. But like the rest of Andor, it also offers a more complicated look at the politics behind the rebel/Imperial conflict.

As the local civilians gather to witness a sacred meteor shower known as The Eye, we hear the Imperial officers denigrate Aldhani culture. Mocking them as smelly and uncivilized, the officers boast about their schemes to sabotage the Aldhani pilgrimage. The plight of the Aldhani is both sympathetic and enraging—yet in the context of the rebel mission, it’s a tertiary issue at most. The team isn’t here to help the Aldhani. In fact, their attack on the Imperial base may ultimately cause more problems for the locals. Their mission objectives are more abstract than destroying a Death Star or fighting a Sith lord, leading to an incremental victory that benefits the Rebellion in indirect ways.