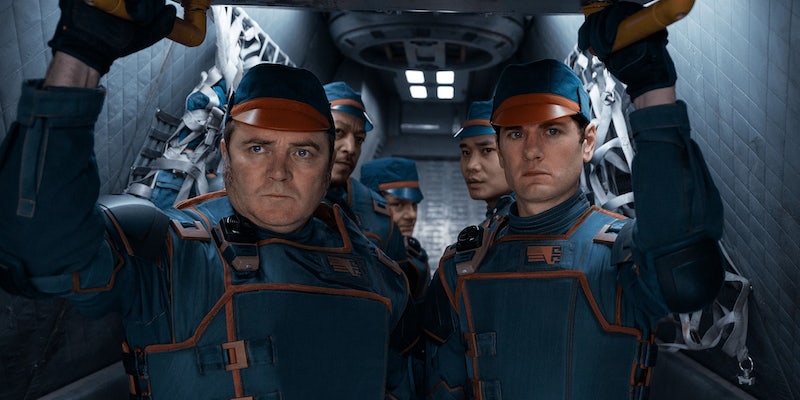 ‘Andor’ is the antidote to copaganda TV, skewering its law-enforcement villains

This post includes spoilers for the first three episodes of Andor.

In most TV dramas, Andor’s villain would be the hero. Deputy Inspector Syril Karn (Kyle Soller) wants to solve a pair of murders, launching an investigation against direct orders from his corrupt boss. He’s young and ambitious, tracking a mysterious criminal who goes on to kill several of his men. A classic crime thriller set-up.

Of course, Syril Karn is also a total slimeball. Within a handful of scenes, it’s clear that Andor is explicitly anti-cop, with a far more sophisticated political outlook than other recent Star Wars spinoffs.

Episode 1 introduces the Preox-Morlana Authority (Karn’s employers) as a corporate offshoot of the Empire, launching in with Cassian Andor (Diego Luna) being harassed by off-duty cops on a Pre-Mor planet. By episode 3, Pre-Mor goons are invading Cassian’s town and brutalizing his neighbors, spurred on by the whims of a single officer. The journey between these two points displays a keen eye for how law enforcement acts as a tool of oppression, deepening the political worldbuilding of the franchise.

While the Star Wars universe has different racial dynamics from our own, there’s still plenty of room for allegory—as Andor illustrates with Cassian’s backstory. Growing up in a secluded forest community on the planet Kenari, Cassian was originally named Kassa. His childhood flashbacks take place in an un-subtitled Kenari language, and he only learns to speak Basic (ie. English) after being adopted by the visiting scavenger Maarva Andor (Fiona Shaw). Maarva believes she’s rescuing Kaasa from a dangerous situation, but her actions inarguably qualify as kidnapping.

Otherwise portrayed as a loving mother, Maarva still separated Cassian from his heritage and his only surviving relative, a younger sister. This conflicted backstory explains why Cassian speaks with a Spanish accent, standing out from the British/American voices we hear elsewhere.

In Andor’s first scene, Cassian visits a brothel in a Pre-Mor company town, searching for his long-lost sister. A pair of security guards immediately clock him as an outsider, becoming angry because he got served first by a hostess. Following him outside, they shake him down for bribe money, jeeringly asking if he just “swam over” into town. Cassian ends up killing them both, and in the resulting murder investigation, the prime suspect is repeatedly referred to as “a human with dark features.”

These Pre-Mor Authority scenes introduce a pitch-perfect array of horrible cops. Karn’s boss is lazy and cynical, dismissing the death of two guards because he doesn’t want to report a rise in crime statistics. By contrast, Karn is a true believer, visibly frustrated when other Pre-Mor employees fail to meet his standards. Rather than being motivated by a moral desire for justice, he seems more concerned with looking smart and being right. He also has no sense of flexibility or sympathy for human nature; a classic “I just want the trains to run on time” kind of fascist.

In case the Imperial-adjacent visuals didn’t tip you off, these characters demonstrate that Pre-Mor is a corrupt, destructive institution. Everyone in the security force is cruel, incompetent, or venal, with Karn merely thinking he’s better because he’s got a spiffy uniform and sees himself as an efficient go-getter.

Tracking Cassian to his home on the planet Ferrix, Karn teams up with Sergeant Linus Mosk (Alex Ferns), a blustery older man who seems thrilled by the prospect of violence. Their dynamic reflects the old trope of a white-collar officer relying on the experience and people skills of a working-class subordinate. Sick of being a glorified mall cop, Mosk is all too eager to help Karn invade Cassian’s town and harass his associates.

Despite their superior firepower and force of numbers, Karn’s team are out of their depth as soon as they land on Ferrix. First off, they only know how to engage with people on a violent, antagonistic basis. Their brutality and paranoia become an act of self-sabotage. One officer accidentally kills Karn’s own informant, and when Karn interrogates Maarva Andor in her own home, her neighbors sound the alarm. Soon people across the city are ringing makeshift bells; a signal that the locals understand, but the cops dismiss as a meaningless intimidation tactic.

The resulting action sequence offers an effective demonstration of urban guerilla warfare, coupled with sharply realistic observations about the behavior and mindset of violent police.

Confused by the lack of street signs, the Pre-Mor squad is thrown into disarray. They haven’t bothered to learn about the town they’re invading, and Ferrix’s urban geography acts as a passive obstruction to outsiders. Paired with the low-tech civilian alert system, this gives Cassian’s allies enough time to sabotage the Pre-Mor ship, attaching a cable so it crashes when one of the cops tries to take off.

As reports come in that Cassian has a partner (Stellan Skarsgård’s Luthen Rael), Karn and his men begin to panic. Seeing the Pre-Mor ship explode, Mosk yells, “We’re under siege, they’re everywhere!” Like most bullies, he’s a coward when the tables are turned. He now perceives Cassian as almost superhumanly dangerous. Meanwhile, Cassian has spent most of the episode hiding in a warehouse, escaping by the skin of his teeth.

Although Cassian’s escape is a satisfying conclusion to Andor’s first act, it’s not exactly upbeat. Ferrix’s homespun defense system worked, but Maarva is traumatized and several people are dead. Cassian’s friend Bix has lost her boyfriend, first to betrayal and then to police brutality. And Cassian has had to flee his home, aware that his friends and family may still be penalized for knowing him.

As for Syril Karn, this mission failed due to his own mismanagement and poor leadership—but it remains to be seen whether he’ll learn from the experience. It seems more likely that he’ll just double down on his desire to arrest Cassian, leading to more violence and destruction.