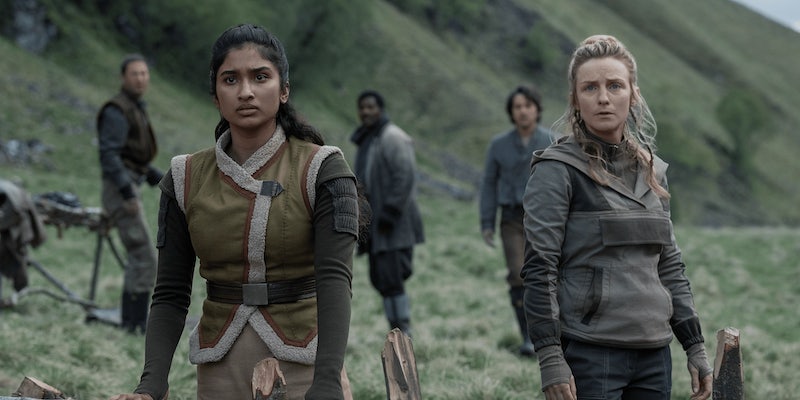 Apparently it’s not that hard to include queer people in ‘Star Wars.’ Who knew?

After years of frustrating debates about how to include queer characters in Star Wars, Andor finally went ahead and did it. Unlike the overhyped sapphic kiss between two background extras in The Rise of Skywalker, Andor introduced its queer characters organically among the main cast, with zero fanfare and no particular interest in creating Disney-friendly role models.

It’s not surprising that this happened in Andor specifically, the first “adult” Star Wars show. Hollywood has a nasty habit of categorizing queer representation alongside mature content like sex and violence, which is why Marvel’s R-rated Jessica Jones featured a lesbian character four years before Avengers: Endgame dropped that laughably tokenistic gay cameo. Regardless of the journey it took to get here though, Andor has no trouble introducing queer characters in an organic manner.

After abandoning his life on Ferrix, Cassian has joined a Rebel cell on the planet Aldhani. Episode 4 dropped some hints that there might be something going on between team leader Vel Sartha (Faye Marsay) and the enigmatic Cinta Kaz (Varada Sethu), and episode 5 made their relationship more overt.

Sensing that Cassian might try to hit on Cinta, one of his new teammates warns him that she’s already “sharing a blanket” with someone. Later we see Vel and Cinta emerging from the same hut, and as the episode progresses, there are several moments where Vel is openly (and somewhat irrationally) jealous of Cassian speaking to Cinta. She’s either a very untrusting girlfriend, or her stress about the mission is overflowing into her personal life.

Technically, Vel and Cinta’s relationship is still subtle enough that oblivious and/or homophobic audiences may not pick up on it. Some viewers may interpret this as evidence of Disney toning down the impact of queer stories, but I personally wouldn’t go that far. Straightforward coming-out scenes can often feel clunky and disruptive, and episode 5 does a pretty smooth job of illustrating Vel and Cinta’s dynamic. Plus, we still have at least one more episode on Aldhani to flesh out their relationship.

Of course, the team’s upcoming mission opens up an ominous possibility for Vel and Cinta’s future. Considering the show’s tone so far, it’s unlikely that everyone will survive. And while there’s nothing wrong with killing off some supporting characters, it’s not a great look to introduce a queer couple and then crash directly into the oft-criticized Bury Your Gays trope.