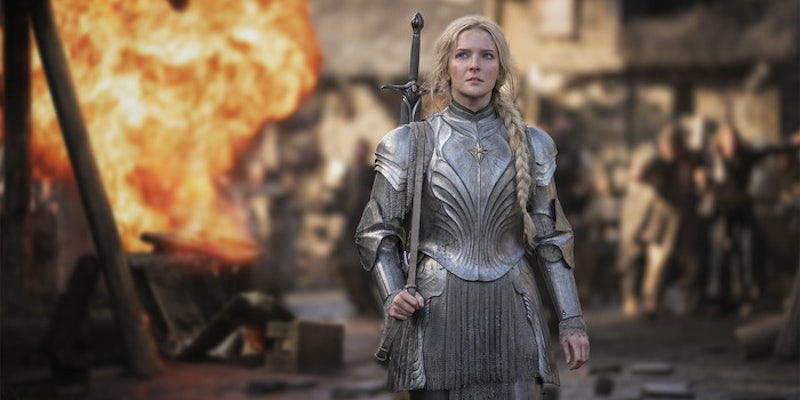 The Lord of the Rings: The Rings of Power/Amazon

‘The Rings of Power’ review: Amazon tries its best to copy Peter Jackson’s ‘Lord of the Rings’

As a page-to-screen adaptation, Amazon’s Lord of the Rings feels more like a franchise spinoff than a new interpretation of a literary work. Sparing no expense, The Rings of Power leans heavily on the foundations laid by Peter Jackson, from its visual style to the masterful score by Bear McCreary, which echoes Howard Shore’s auditory map of Middle-earth. There’s a definite sense that showrunners J.D. Payne and Patrick McKay are trying to play the hits, encouraging nostalgia without forging their own artistic path.

This leaves me with mixed feelings because while the first two episodes are enjoyable, they largely feel like a retread—both of Jackson’s Lord of the Rings trilogy, and of other fantasy shows we’ve seen in recent years. With the budget and timeframe of a blockbuster movie, this two-hour premiere struggles to evoke the kind of looming mysticism and sincere emotion you hope to see from Tolkien.

The Lord of the Rings: The Rings of Power

Release Date: Sept. 1, 2022
Creators: J.D. Payne, Patrick McKay
Streaming: Amazon Prime Video
With impressive production values and some very obvious nods toward Peter Jackson’s ‘Lord of the Rings’ trilogy, ‘The Rings of Power’ is an intriguing foray into Middle-earth’s distant past. However, it lacks a sense of individuality, prioritizing spectacle over deeper characterization.

Payne and McKay (who, like the creators of Game of Thrones, have no prior TV credits) do make good use of Amazon’s gargantuan production budget. Unlike the recent spate of hollow CGI murk from Netflix and Disney, TRoP is packed with gorgeous locations and lavish production design. Set thousands of years before the birth of Frodo Baggins, we enter an era of Middle-earth featuring a few familiar figures (Galadriel; Elrond), but a rather different cultural landscape. There’s friction between the elves and humans, and the Shire doesn’t exist yet. The hobbit role is filled by a nomadic precursor race, the harfoots.

Based on Tolkien lore, the show will chart the rise of Sauron (currently a distant, half-forgotten enemy) and the creation of the titular Rings. Galadriel is arguably the lead, characterized as a steely warrior who believes the world is under threat. Living in an era of peace, Galadriel’s compatriots assume her paranoia is an unhealthy relic of long-dead wars. We, of course, know better.

These first two episodes span numerous locations, introducing a cross-section of life in the Second Age of Middle-earth. A young harfoot named Nori (Markella Kavenagh) is TRoP’s equivalent of Frodo or Bilbo Baggins; a charming, upbeat girl who yearns for adventure. She’s the most emotionally engaging character so far, something the show struggles with elsewhere.

Morfydd Clark offers an intriguingly tough, angry interpretation of Galadriel, while Robert Aramayo’s Elrond is my personal fave—a wry politician who is currently quite low on the elvish food chain. Unfortunately, though, TRoP fails to make the elves seem otherworldly or impressive. Despite a respectable stab at Tolkienesque dialogue (“What devilry is this? Some dark sorcery of old.”) these elves are far too grounded and human.

One of the biggest changes from Tolkien canon is, of course, TRoP‘s foray into racially inclusive casting. After several years of watching shows like The Witcher update their white European source material, TRoP’s diverse cast feels both welcome and unremarkable—although there are some teething problems. For instance, the elvish soldier Arondir (played by Afro-Latino actor Ismael Cruz Córdova) is initially defined by a racism subplot. Echoing Tolkien’s love of human/elvish romances, Arondir is in a secret relationship with a human woman (Nazanin Boniadi). But the show makes the classic mistake of portraying their relationship exclusively through the lens of adversity and persecution, rather than illustrating why they love each other in the first place.

These optics become doubly questionable when we consider Arondir’s role compared to the other prominent elves. Galadriel, Elrond, Celebrimbor, and Gil-galad (all of whom are white) are lofty, influential figures from Tolkien lore. Meanwhile, Arondir is a working-class character created for the show, facing petty attacks from human bigots. These racial dynamics wouldn’t be such a problem if the casting was more diverse across the board, including legacy characters from Tolkien canon.

Avowed Tolkienites will surely have deeper thoughts about Amazon’s flexible interpretation of Middle-earth’s Second Age, but I won’t pretend to be an expert. What I will say is that while The Rings of Power is gloriously expensive and pleasant to watch, it’s also a bit shallow.

It’s hard to dispel the idea that The Rings of Power exists primarily as an investment in intellectual property. Lord of the Rings is a lucrative brand, and the movies have unique nostalgia value. Amazon’s adaptation strategy involves pouring half a billion dollars into a replica of Peter Jackson’s work. Much of the architecture is eerily familiar. The elvish costumes use similar fabrics. The camera pans across the landscape in an instantly recognizable manner. The music follows the same motif structure, pinning specific subgenres (Celtic folk; symphonic Romanticism; eerie choral vocals) to similar characters and locations. In short, there’s no attempt to make this a distinct project in its own right.

To me, this approach feels both cynical and disappointing because Jackson’s Lord of the Rings is a unique work of art. The Rings of Power may copy some of its technical strengths, but it can’t recreate the same impact—especially when viewers have spent the past 20 years watching fantasy media that borrows from the same source.

Without a strong aesthetic identity of its own, TRoP needs to draw us in with interesting new characters and relationships—and that really isn’t happening on a script level. Representing a full quarter of season 1, these first two episodes benefit greatly from the audience’s pre-existing love for Middle-earth. The spectacle is there, but there’s far less emphasis on emotional storytelling, hindered by how the main characters are separated into individual subplots with their own supporting casts. Contrast this with the opening episodes of genre hits like Game of Thrones, Stranger Things, or For All Mankind, which immediately launch exciting conflicts and alliances between the leads.

Fantasy fans (myself included) are generally happy to sign up for a slow burn, and Middle-earth is an important draw in itself. But this introduction suggests a concerning lack of interest in character-based drama. While impressive production values can go a long way, they’re certainly not everything—especially when your show is borrowing so much from someone else’s work.