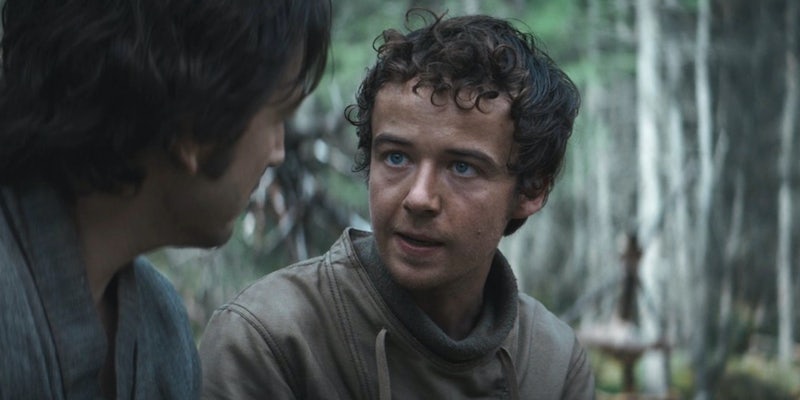 ‘Andor’ episode 5: Of course the Rebellion includes a Theory Guy

This episode feels like an observational dramedy about activist politics, complete with a guy who wants you to read his manifesto.

What’s life like inside the Rebellion? The main Star Wars movies don’t have time to go into it, but Andor picks up the slack. Preparing for an undercover mission on the planet Aldhani (aka Scotland), Cassian disrupts an already-tense atmosphere among his new Rebel allies. The resulting subplot is a combination of heist thriller and observational dramedy about the internal dynamics of an activist group.

Embedded on Aldhani for months, the team is less prepared than they wish to appear. Cassian is both an unwanted interloper and an essential asset, inspiring suspicion from Skeen (Ebon Moss-Bachrach), who quizzes Cassian on why he recognizes his prison tats. Meanwhile, team leader Vel Sartha (Faye Marsay) is hanging onto authority by the skin of her teeth, translating her stress into paranoia about Cassian hitting on her girlfriend.

Some of these characters have personal reasons for fighting the Empire, pushed to the brink by tragedy. Others are more enigmatic, with Karis Nemik (Alex Lawther) as the odd one out. While everyone else is focused on the mission at hand, Karis is a big-picture thinker. He’s a Theory Guy; the Star Wars equivalent of someone who hands out PDFs of Marx.

In the same scene, writer Dan Gilroy deepens what might otherwise be a simple piece of exposition for the upcoming mission. “Can’t be jammed or intercepted,” Karis explains, introducing Cassian to an antique navigational device. “Something breaks, you can fix it yourself.”

“Hard to learn,” Cassian remarks. “Yes, but once you’ve mastered it, you’re free,” Karis replies. “We’ve grown reliant on Imperial tech and we’ve made ourselves vulnerable. There’s a growing list of things we’ve known and forgotten.”

He’s essentially illustrating the difference between Gen-X and Gen-Z tech literacy. Twenty years ago, computer owners were more likely to know how to fix or modify their devices. Now, that’s a niche skill. Companies like Apple design their products to discourage DIY repair, forcing users to rely on proprietary upgrades. The popularity of TikTok as a search engine represents a similar problem: An app that’s addictively usable but factually unreliable, and whose inner workings are both obscure and riddled with bias. As Karis so neatly explains, learning an old-fashioned skill is often more useful than taking the easier route.

Pop culture has a habit of poking fun at this kind of thinking, painting characters like Karis as conspiracy theories and laughable eccentrics. The most notorious example is the way Harry Potter turns Hermione’s anti-slavery crusade into a punchline. In what’s now becoming a habit, Andor takes a more grown-up viewpoint. Karis is an amusingly earnest character, but it’s also pretty clear that he’s right. His role opens up new ways of looking at the Rebellion, providing a necessary contrast with the cynical attitude of our title character.