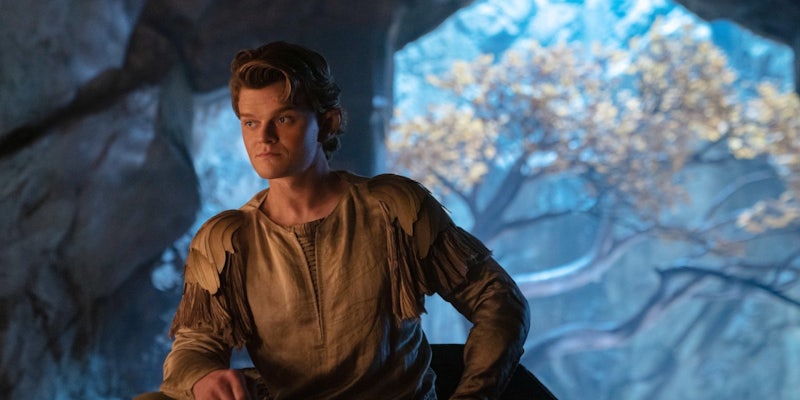 In a show that often prioritizes style over substance, Durin and Elrond ring true.

Slowly but surely, the central relationships of The Rings of Power are beginning to coalesce. That’s a positive sign for the show’s future but a damning indictment of the writers’ priorities thus far, given that we’re now past the halfway point of season 1.

Recent episodes have developed the outline for some intriguing conflicts around Isildur, Galadriel, Miriel, and young Theo. However, other elements remain frustratingly thin—for instance the romance between Arondir and Bronwyn, which still hasn’t evolved beyond the single-phrase logline “they’re secretly in love.” This lack of complexity feels especially stark after watching the new Star Wars show Andor, which elegantly demonstrates how to tell a smart, emotionally resonant story in a big-budget franchise context. After five episodes of The Rings of Power, only two relationships feel truly three-dimensional and naturalistic: Durin and Elrond, and Nori and The Stranger.

While Númenor prepares for war and Bronwyn’s human neighbors debate swearing their allegiance to (maybe) Sauron, this week’s most interesting subplot hinged on the friendship between Durin and Elrond—a dynamic that draws directly from Gimli and Legolas in Peter Jackson’s The Lord of the Rings.

Most of their scenes involve them either teasing each other or having big, emotional conversations. You easily accept that these guys have been friends for decades. In turn, this gives Robert Aramayo (Elrond) and Owain Arthur (Durin) lots of room to play around, something that’s unfortunately lacking for many of the show’s other lead actors. (Galadriel, for instance, is written as haughty and confrontational in virtually every scene, meaning we barely see a sliver of Morfydd Clark’s range as an actress.)

Last week saw Durin swear Elrond to secrecy about the discovery of Mithril in one of Khazad-dûm’s mines—a pact that could spell disaster if Elrond betrays his trust. This issue has already come to a head, thanks to a diplomatic meeting between Durin, Elrond, and Gil-galad.

Gil-galad, it turns out, had already suspected that Mithril ore was lurking somewhere beneath Khazad-dûm. Apparently, this knowledge is crucial to the survival of the elven race. The Rings of Power takes the concept of the elves’ fading immortality and spins it into a more urgent threat, portraying Mithril as the cure to an elvish plague. As Elrond and Gil-galad explain, Mithril was originally created in an ancient battle between a balrog and a heroic warrior, fighting over a tree. When the tree was hit by lightning, it created a kind of holy substance in the earth below. Mithril is imbued with the same life-force that fuels the elves’ immortality, and if they can mine enough of it now, they can save elvenkind from certain doom.

Gil-galad’s solution was to send Elrond to Khazad-dûm as an unwitting spy, leveraging his friendship with Durin. And this does actually work, although not in the way Gil-galad expected.

Elrond refuses to break his vow to Durin by revealing the source of the Mithril to Gil-galad—even if it means the annihilation of the elvish race. Instead, he speaks directly to Durin, laying the facts on the table. If Durin agrees to the (very dangerous!) task of mining a lot of Mithril as fast as possible, he can save the elves—with no other motive than his friendship with Elrond, and the fact that it’s the right thing to do. Durin agrees, of course. Their only obstacle now is Durin’s father, the king.

The Rings of Power is full of life-threatening conflicts and portents of doom, but to me, this Elond/Durin/Gil-galad issue is the most compelling, for the obvious reason that it has clear personal stakes. It still feels weird that while this show emulates Peter Jackson’s Lord of the Rings in so many ways, it’s far more interested in the surface elements—music, production design, nostalgia-inducing setpieces—than building the kind of deep, sincere relationships that made those movies so gripping.