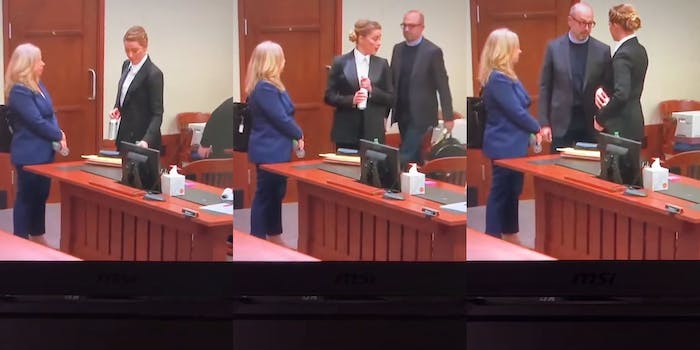 ‘Y’all are really stretching with all these’: Depp fans push theory that Amber Heard is sneaking alcohol into court

The Amber Heard-Johnny Depp defamation trial is nearing its end, but the online interest in it is ongoing. Earlier in the month, Depp fans pushed a baseless theory that Heard was snorting cocaine while on the stand, in an attempt to discredit her testimony. Another persistent theory is that she’s hiding booze in her water bottle.

On May 3, a tweet claimed to capture Heard’s “DEEPLY sus moment in court with her ‘water bottle.'” A TikTok posted May 5 by tara_of_terra suggests that a clip of Heard picking up a bottle and putting it in her jacket pocket when “a cop” walks up is evidence that she is hiding alcohol in court. There’s no actual evidence presented in the TikTok (and that’s not a cop), just the caption, “What are you hiding in that bottle Missy?” The TikTok has more than 14 million views.

“She’s been drinking in this court room from day one,” says one comment, which has more than 116,000 likes. Another comment, with more than 45,000 likes, reads: “We know it’s her with the alcohol problem not him.” Several comments also reference the cocaine theory.

A search for “Amber Heard water bottle” on TikTok brings up multiple courtroom clips. Another popular theory from Depp fans is that earlier in the week Heard threw her water bottle in a trash can and an officer then picked it up, though that’s not shown in any version of this clip—a familiar tactic with pro-Depp content. This claim was also repeated on Twitter, and videos about the water bottle spread to YouTube.

Other TikTokers used the viral “Oh, that’s liquor” sound with clips from the trial, or claim that Heard is drinking a purple or pink liquid while on the stand.

@eazydoesit619 Reply to @plantmom1029 Did you see when the deputy got a message on his earpiece to grab the bottle that she threw away out of the trashcan? #justiceforjohnnydepp #amberheard #fyp #viralvideo #johnnydepp #johnnydepptrial #busted ♬ original sound – MynameisBelle

What will ultimately be the effect of this flood of decontextualized, misogynist content, the majority aimed at Heard? As many pieces have pointed out this week, it could make abuse victims decide not to come forward. The trial is also reportedly creating a template for abusers to use: Sue for defamation if they’re accused of domestic abuse, which could also make victims decide not to come forward.

And it could set a template for other high-profile celebrity cases: Fans of Marilyn Manson, who is suing accuser Evan Rachel Wood for defamation, are circulating the #IStandWithMarilynManson hashtag.