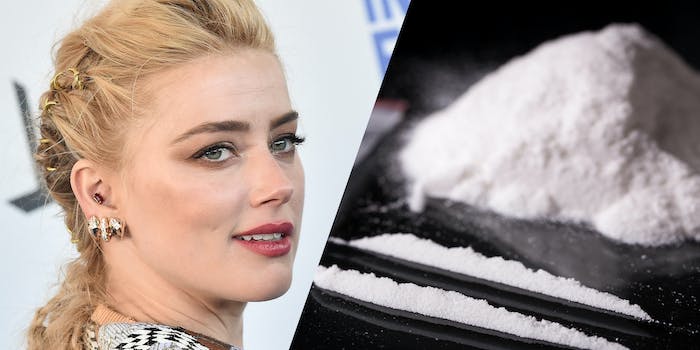 ‘It is obscene what the internet can make people believe’: Cocaine Gate hits Johnny Depp and Amber Heard trial

‘This trial is pissing me off fr, I’m sick of it.’

Social media users have made a spectacle out of the Johnny Depp and Amber Heard trial. Now, Twitter users are in a frenzy debating a clip of Heard blowing her nose during her testimony, with some users baselessly accusing Heard of snorting cocaine from her tissue.

Four weeks into actor Johnny Depp’s defamation trial against his ex-wife Amber Heard, Heard took to the stand. She accused Depp of abusive behavior, including controlling her clothing and career choices, physical attacks, and sexual assault, according to Insider.

Earlier in the trial, Depp claimed he was in fact the victim of abuse by Heard. He is suing Heard for $50 million in damages in response to Heard’s claims of domestic violence. Heard claims she has only acted in self-defense, and is counter suing for $100 million, according to NBC News.

The cocaine theory originated with one tweet last week by user Slow News Day (@slownewsdayshow), which received over 222,000 likes and 32,000 retweets, showing a video clip of Amber Heard appearing to sniffle and blow her nose into a tissue or handkerchief while taking the stand at the trial. Some Twitter users say looks like she’s snorting cocaine in the clip.

“Yo I’ve done some shit in my day but I’ve never had the stones to do cocaine in a courtroom,” Slow News Day said in the tweet.

While some users took the tweet as a joke, many seemed to take the accusation seriously and debated whether it was true.

“I’m not saying you’re wrong, but she has to go through a search to get into the courthouse. That would be quite a risk,” one user replied to the tweet.

“Anyone insisting there’s no way she’s snorting some kinda dope here clearly doesn’t have a lot of experience with drugs,” one user said.

Other users speculated Heard was using menthol, a substance used in movies to make actors cry.

“It’s to make her cry, she rubs tissue over her eyes. The tissue has stuff used in movies for tears,” another user responded.

One reply to the tweet, which has over 18,000 likes and was posted by user ULOMA (@ulxma), pointed out that there is no evidence Heard was doing cocaine and criticized Twitter users for spreading misinformation.

“In a longer video it shows that she grabs the tissue straight out of the judge’s tissue box and then you have 139k people who believe she just did a line of coke. It is obscene what the internet can make people believe. It is truly obscene,” the user tweeted.

In a longer video of the trial, Heard sniffles and blows her nose multiple times, grabbing a tissue or handkerchief from her side of the stand. No evidence suggests Heard was actually doing cocaine in court.

The wild speculation that Heard was doing cocaine in court spread to TikTok, YouTube, and Facebook  too, getting hundreds of thousands of views. As Rolling Stone noted, Heard’s testimony is being acted out by cats on TikTok, too, as the internet rushes to defend Depp and discount Heard.

Many users on Twitter complained about the unruly attention the trial is receiving on social media.

“It’s absolutely crazy they’re making a trial where both accused the other of violence into a reality TV show,” one user tweeted.

“This trial is pissing me off fr, I’m sick of it,” another user said.

We’ve reached out to representatives for Depp and Heard listed on their respective IMDb Pro pages.