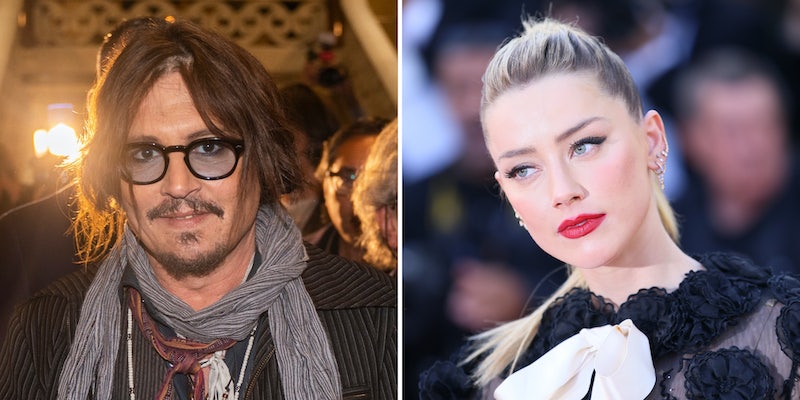 'Whether you believe Amber or not, many people have been raped with bottles.'

This story contains discussion of sexual assault and rape.

Heard testified in court that Depp allegedly threatened to “carve up” her face with a broken alcohol bottle during an argument about his drinking in March 2015. She claims he later raped her by inserting a bottle inside her, noting that she wasn’t aware of whether or not the bottle was broken. “I couldn’t feel it,” she said. “I couldn’t feel anything.”

The product was released just over a week after the trial’s verdict was reached. Depp sued Heard for $50 million dollars in defamation damages from her 2018 Washington Post op-ed, which did not name Depp specifically, claiming he had lost several roles and faced damage to his reputation as a result. Heard counter-sued Depp for $100 million. The verdict, reached June 1, ruled to afford Depp more than $10 million in damages, while awarding Heard $2 million in compensatory damages.

The trial resulted in an explosion of pro-Depp social media content, which has also led to the spread of misinformation and conspiracy theories shared through platforms like TikTok. Much of this support, as well as hate toward Heard, comes from conservatives who believe the trial is a reckoning of the impact of the #MeToo movement.

As a result of the Heard-themed sex toy that references an alleged instance of assault, Twisted Fantasies faced criticism online. The post received over 400 quote-tweets.

Several argued that it’s unethical to profit off such a sensitive issue.

“All of you freaks capitalizing off this trial are going straight to hell. especially you, you are NEVER seeing the pearly gates,” one user wrote in a quote tweet.

Many others claimed that, regardless of each individual’s opinion on Heard and the trial, the product could be triggering for other survivors who’ve been in similar situations. They also criticized the publicizing of the trial.

“THIS is why making a woman testify about sexual assault, live, in front of the whole world was a crime against humanity,” one Twitter user wrote. “Whether you believe Amber or not, many people have been raped with bottles. To make fun of [a] woman’s story of being raped by a bottle is an insult to them all.”

Twisted Fantasies shared a statement on Twitter just two hours after the product announcement. The shop argued that Heard’s story of alleged domestic abuse and sexual assault was a lie, referencing Heard’s former assistant’s claim that her own story as a survivor influenced Heard’s.

“[Heard] stole her personal assistant Kate James’ story and spun it as her own. She used a very real platform to pull the world on her side,” the statement reads. “With copious evidence it was proven in court she altered and lied about all of her allegations including the night of her alleged rape. Amber Heard used a movement against her husband, because he was a man that she though no one would believe.”

“In this trial Johnny Depp won on all accounts strengthening that men can be the victims of abuse as well,” the statement continues. “If you find this product triggering we apologize because that is not the intention. We do however stand behind that it is a tongue and cheek way to support Johnny Depp and anyone who is fighting against their abuser.”

“So according to this it’s fine because you don’t believe amber but you have no issue with mocking kate’s claims even though you believe them? so hurting one woman who likely will never see this is worth harming regular abuse victims who will see this,” one user tweeted.

The Daily Dot reached out to Twisted Fantasies via email for comment.

Update 2:30pm CT June 10: Twisted Fantasies told the Daily Dot via email that the company is in the process of changing the product’s name and removing “all references to the court case.” The also added that trivializing sexual assault was never their intention.

“The Depp-Heard trial captivated the world for weeks and we felt that making an adult toy in the shape of an alcohol bottle would be quite topical and would play well with all the current events,” a company representative wrote in an email. “We saw this adult toy more of a satirical response to the overall court case but in no way did we ever mean to trivialize sexual assault.”

They also offered an apology to sexual assault survivors who may have been upset by the product.

“If the product triggers sensitivities for people that have gone through sexual violence and personally related to Amber’s claims we apologize tremendously,” they said, “and hope they can see our intentions were not to downplay rape or other heinous acts of violence.”