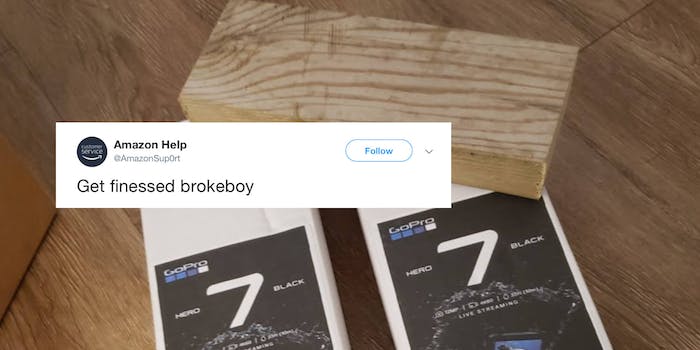 In 2019, customer service representatives for many companies can be reached with a simple tweet. It’s just as easy for an account to impersonate them.

The @AmazonHelp Twitter account, which is Amazon’s official customer service account, is being parodied by @AmazonSup0rt, which comments on complaints intended for the real account. Most of the tweets center around products that have been damaged during the shipping process.

One tweet reads, “Get finessed brokeboy,” in response to a customer who purchased two GoPro cameras, only to find that they had been shipped blocks of wood instead.

One customer complained about receiving a box of shards instead of the whole drinking glasses they were hoping for.

“F*ck you want us to do bitch,” AmazonSup0rt wrote in response.

Another customer used Amazon’s grocery delivery service, Amazon Fresh, and received molded cheese as part of their order. In response, AmazonSup0rt wrote, “Dear George, congrats u might be the first mf to buy cheese off Amazon. L.”

Real Amazon warehouse employees have reported poor working conditions for years. In an effort to combat the reports, Amazon launched a weird PR campaign to get “Amazon FC Ambassadors” to tweet about how much they love working for Amazon.

AmazonSup0rt, of course, poked fun at that.

“I love Amazon and I love Jeff Bezos! I will do everything in my power to provide legendary customer service as Jeff intended,” it wrote.

This is followed by a small, coded message in a generated font that reads, “Plz help me my family has been living off slim jim sandwiches I don’t want to live anymore.”

A more recent tweet from the parody account simply reads, “Damn that’s crazy,” in response to a woman who called out Amazon because her order was delivered by being “tossed over” her fence and into harm’s way–her dogs destroyed the multipack of black underwear she ordered.