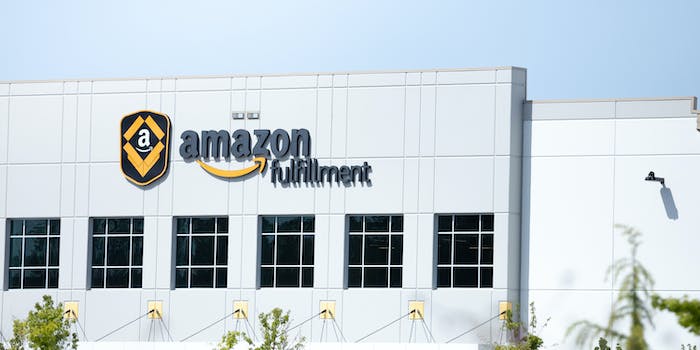 Twitter users are making memes out of the dystopian 'Amazon FC Ambassador' Twitter accounts, one of the strangest PR astroturfing campaigns in recent memory.

Amazon has faced criticism for the working conditions in its fulfillment centers for years. In 2018, the company launched an ambassador program for actual Amazon employees to tell the world just how good they have it, despite the many reports to the contrary. This week, the efforts of the project went viral, when a horde of accounts deflecting criticism of tech giant began posting aggressively.

Open-source investigation site Bellingcat estimates that there are 53 accounts tied to the Amazon Ambassador program. These accounts appear to be administered by Amazon through a corporate social media software called Sprinklr, and workers cycle through them. This can have a confusing effect–including leading to tweets from an account called @AmazonFCRaphael but from a woman identifying herself as Michelle.

The campaign began rather tepidly, with workers defending their employer.

Everything is fine, I don’t think there is anything wrong with the money I make or the way I am treated at work

I suffer from depression too, and at one point I wanted to quit Amazon. But I realized it was my fault for the problems I was dealing with, and not Amazon’s. I’m allowed to talk to people, but sometimes I don’t want to. Now I have some great coworkers to pass the nights with.

Who said that robots will replace us? 🤖 There are sortation robots here at Amazon BHX4 – but they cannot operate on their own. 🤖❌ Here are two of my colleagues, one feeding items in the machine, the other one closing the full totes. The robot is only sorting the items. 👬 ✅ pic.twitter.com/C09SY8LvDM

The FC Ambassadors came to viral Twitter attention when a number of them swarmed Diana Wilde (@rulesObeyer), after she criticized the company. After a half-dozen accounts replied to her, she tweeted, “I feel like I’m talking to the borg.”

really like? cause your workers are liars? you’re not going to convince the working class that everything is fine by telling us where to avert our eyes, we already know what it’s really like. why don’t you really treat your workers better, you can afford it

Not only is this ambassador program poorly conceived from a PR standpoint, but it also has logistical issues. The Amazon ambassador accounts have “Amazon FC” in the user name and a cardboard box emoji. Unlike Twitter’s verified checkmark, these identifying elements are easy to fake, and plenty of users are doing so and mocking Amazon’s efforts.
To recap, we have easily mimicked accounts tweeting content verging on dark parody being run by Amazon, a common internet target. A number of Twitter users saw the dystopian elements in the exchange with Wilde, and the FC Ambassador accounts in general. Thus, a meme was born.

I love working for Amazon. Such appreciation for employees. For example, once a month Amazon will host a party for us. One of us is chosen as a sacrifice by the Council of Alexa to appease the Algorithm. It is a great honor. I hope to be the Chosen one day.

I took a few of the most bleak Amazon FC Ambassador tweets and made a verbatim song out of them. It’s an extremely sad song.

hello, JormAmazonFC here, I am real human Amazon Ambassador. Working in the hot warehouse is fun to me. I do it before I go home to human 2 kids 1 dog in my home. Do you have any other questions or may I go back to my great job.

At Amazon, we are family. We drink of the same chalice and, through the blood, we are reborn to the life everlasting. While you grow withered and hoary with age, we, the brides and bridegrooms of the Master, are untouched by the centuries. We are as gods. You are food to us. pic.twitter.com/pp1YG8Jtdq

Update 6:16pm CT, Aug. 16: An Amazon spokesperson told the Daily Dot that its FC ambassadors are real employees who work in its fulfillment centers.

“It’s important that we do a good job educating people about the actual environment inside our fulfillment centers, and the FC ambassador program is a big part of that along with the FC tours we provide. This year alone, more than 100,000 guests have come to see for themselves what it’s like to work inside one of our FCs. If you haven’t visited, I recommend it,” the spokesperson wrote in an email statement.