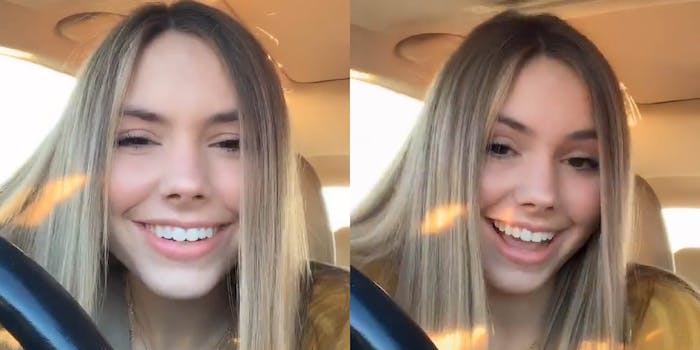 Here's why she's blown up.

Breakout TikTok user Alex French hit one million followers this weekend—and she did it overnight.

The viral star is known for dancing and lip-syncing to music in her videos. She’s had the account since April but started posting regularly in November. In a video posted two days ago, French thanked her followers for getting her to the 300,000-follower landmark. She now has about 1.3 million.

She started gaining popularity after she posted a video compilation of her saying “hi” when she had a sore throat. People began making copies of the video. But whether TikTok users loved it or hated it, the video helped her gain fame and followers.

Although French is known for the dancing TikToks, she’s mostly known for her big smiles in the videos. French’s followers have told her that she looks like Katie from the Horton Hears a Who! movie. She’s made videos where she shows their likeness.

TikTok is the fastest growing social media platform and has 500 million active users worldwide, according to Oberlo. But despite the popularity of the app, French’s growth, in such a short time period, is surprising.

Taylor Lorenz, a New York Times journalist who reports on the internet, tweeted that French’s growth outpaced Charli D’Amelio, who is a TikTok star also known for her dancing videos.

Twitter users are sharing their shock about French’s TikTok takeoff. And of course, the rumors have begun, with some doubting that her raspy voice is real. Others are questioning why she got famous so quickly. (French has pointed out, herself, that she’s an awkward dancer.)

the new hype on tiktok is on alex french lmfao she literally had 400K yesterday morning and now she has 1.2M 🥵🥵🥵🥵🥵 this shits trippy

It seems like French’s viral growth won’t stop anytime soon. She posted a video thanking her followers for hitting one million. Less than 12 hours later, she has 300,000 more followers.