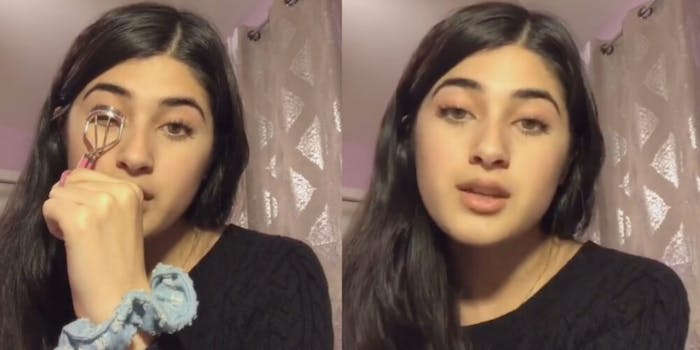 The company says she was suspended for an Osama bin Laden photo.

TikTok suspended a Muslim teen’s account after her video series on Chinese internment camps went viral, according to Business Insider.

The videos, which are masked as makeup tutorials, were posted by 17-year-old Feroza Aziz under the username @getmefamouspartthree.

One of the videos in question starts off as a “how to get long lashes” tutorial.

“So the first thing you need to do is grab your lash curler, curl your lashes, obviously, then you’re going to put them down and use your phone that you’re using right now to search up what’s happening in China, how they’re getting concentration camps, throwing innocent Muslims in there, separating their families from each other, kidnapping them, murdering them, raping them, forcing them to eat pork, forcing them to drink, forcing them to convert to different religions, if not, or else they’re going to, of course, get murdered,” Aziz says in the video.

While the videos remain on the platform, Aziz’s account has been suspended by TikTok.

A TikTok spokesperson told Business Insider that Aziz’s account was suspended because of an Osama bin Laden video she made on a separate account, not her China videos. She allegedly made a new account, which is where she posted the videos criticizing the Chinese government. It is against the platform’s rules to open another account after the previous one has been suspended, according to TikTok.

“TikTok does not moderate content due to political sensitivities,” the spokesperson told Business Insider. “In this case, the user’s previous account and associated device were banned after she posted a video of Osama Bin Laden, which is a violation of TikTok’s ban on promoting terrorists.”

In her latest videos, Aziz is referring to the detention of Uighur people, an ethnic, mainly Muslim group in Xinjiang, China. It is estimated that around 1 million Uighurs are being held in internment camps in China at the moment.

While TikTok claims that the suspension has nothing to do with political matters, the company is owned by Chinese company ByteDance. Chinese tech companies have a history of complying with orders from the government, according to Business Insider.

“I still find it suspicious that TikTok took down my video right when my posts on China’s concentration camps were made,” Aziz told BuzzFeed News. “Doesn’t sound right to me.”

The Daily Dot has reached out to TikTok and Feroza Aziz.