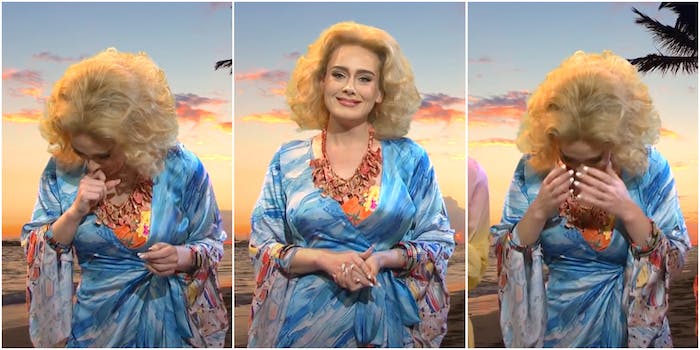 Adele’s ‘SNL’ sketch about Africa is being called problematic

People love that she broke character. What they don't love is the sketch itself.

People love that Adele broke character during a Saturday Night Live sketch. What they don’t love is the sketch itself.

Viewers are criticizing the sketch in question for fetishizing African men. However, in that same sketch, and Adele broke character, and fans are calling it the best moment of the night.

The British singer broke down in laughter during a sketch about the “Tourism Board of Africa.”

Standing beside cast members Kate McKinnon and Heidi Gardner, the 32-year-old singer played a divorcée who recounts her encounters in “beautiful, beautiful Africa.”

The trio listed reasons why tourists should travel to Africa, stressing the benefits of the “tribesmen.” Adele giggled as she noted the “lush, dangling foliage.”

McKinnon’s character described her travels to Africa to find a “new beginning” following her divorce. The “Hello” singer continued about a “deep, deep connection” to the continent, struggling to deliver her words without laughing.

“You can feel it in your stomach,” Gardner added, reemphasizing the transparent sexual euphemisms.

But in the end, Adele broke character, doubled over with laughter, while experienced vets Gardner and McKinnon held tight.

The skit poked fun at the obviously long-known, racist practice of white men and women participating in sex travel in African countries.

Controversy aside, many agreed that Adele killed on SNL.

However, the skit itself was dragged through the streets of social media for its racist angle.

“I think that creating satire to prove a point can be meaningful but this approach was straight up problematic,” wrote @peachy_keane.

Adele was accused of cultural appropriation in August when she posted a photo of herself on Instagram, dressed up to celebrate the Notting Hill Carnival, an African-Caribbean event.

It was also a tonal misfire, given the ongoing events in Nigeria.

The hashtag, #EndSARS, started in 2017, as local activists have called for abolishing a federal police unit called the Special Anti-Robbery Squad.

For nearly three decades, SARS has existed, with critics saying the force regularly abuses its authority, including extrajudicial beatings, hangings, mock executions, sexual assault, and waterboarding. Amnesty International said the organization has information on 82 SARS abuse cases over the past three years alone.