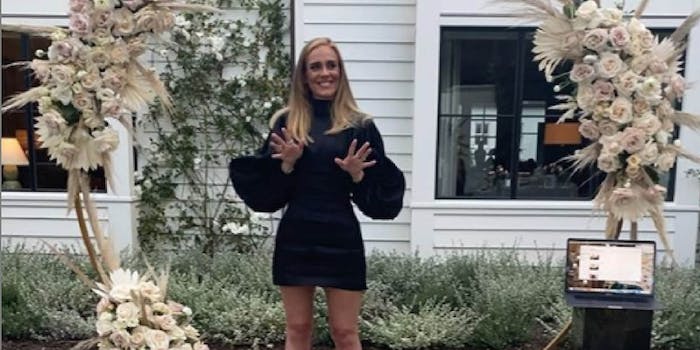 'Maybe people could stop acting like Adele's weight loss is her greatest achievement?'

After a long break from social media, singer Adele posted an Instagram picture to celebrate her 32nd birthday, prompting many news outlets to praise her for her “dramatic weight loss.”

Headlines like “Adele Shows Off Amazing Figure In Tight Black Mini” plagued the internet not long after she posted her picture. Most Twitter users were quick to clap back.

Instead of commenting on her body figure, fans chose to celebrate Adele’s birthday by pointing out her accomplishments, like that she’s a multi-Grammy-Award-winning singer.

“Maybe people could stop acting like Adele’s weight loss is her greatest achievement? I mean…,” Twitter user @Sim0nemurphy wrote in a caption for a screen recording of a scroll through the literal hundreds of awards that Adele has won and been nominated for.

The singer hasn’t posted a picture since December 2019. She’s been pretty absent from social media since her divorce in April 2019. At that time, she said she was going to spend a year, “all on myself.”

In the last year or so, every time she sporadically posts a picture, the singer prompts a flurry of discussion about how great she looks. That’s usually followed by pushback from fans who say she’s always looked great and that we shouldn’t celebrate celebrities only when they lose weight. Today’s photo was no different.

“Adele was literally always beautiful, like genuinely stunning? Pls guys learn how to not be weirdos,” Twitter user @BeeBabs wrote.

“I’d like to thank all of our first responders and essential workers who are keeping us safe while risking their lives! You are truly our angels,” she wrote.