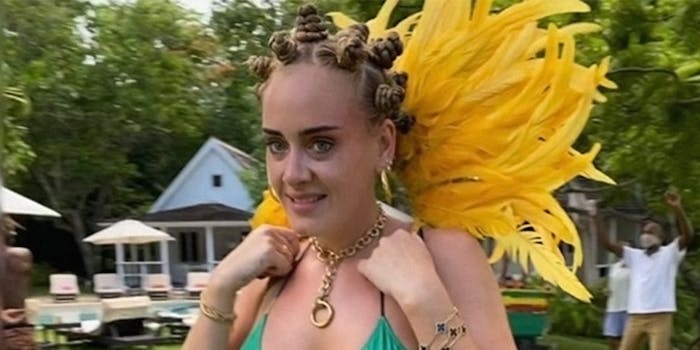 Adele accused of cultural appropriation after showing off her Bantu knots

Cultural appropriation, or not?

Adele is being accused of cultural appropriation after sharing a now-viral Instagram photo in a Jamaican bikini top and with her hair in Bantu knots.

The photo has become a source for an overflow of amazing memes, and also a unique lens into the differences within Black cultures, and what is considered appropriative behavior.

The 32-year-old superstar posted the pic, writing: “Happy what would be Notting Hill Carnival my beloved London.”

For the first time in its 50-year history, West London’s annual celebration of Caribbean and Black culture took place remotely, due to COVID-19. The singer has undergone a noted physical transformation and also wanted to celebrate her body. However, the bikini top and hair knots proved a bit much for people on social media.

But first came the jokes and memes. @ayce24s tweeted, making a play on her hit song “Hello”: “adele said “HELLO PON DI OTHER SIDE.”

@AmeriKraut wrote that someone had to have helped her into her appropriation: “alright, so which one of the innit blacks put those bantu knots in adele’s hair because i know she did not pull that off youtube? ya’ll are messsssssyyyyyyyyyyyyy lmaooooooo.”

However, beyond the jokes at her expense, people had a wide range of takes on whether Adele’s outfit and hair were cultural appropriations of African/Caribbean culture.

Piers Morgan quipped on how Adele was turning into a well-noted appropriationist, Katy Perry.

“If 2020 couldn’t get anymore bizarre, Adele is giving us Bantu knots and cultural appropriation that nobody asked for,” wrote @MrErnestOwens. “This officially marks all of the top white women in pop as problematic. Hate to see it.”

However, for many, condemnation of Adele is misplaced and ignorant of English/Caribbean culture. The cultural differences between Black culture in America and Black culture in England and the rest of the world have been at odds.

Replying to Owens’ tweets, @tom_1986 wrote: “British people reading this, we need to break free of this toxic American ideology & stop it dragging us down. Anyone who has spent five minutes at Notting Hill Carnival knows this is completely normal & is embraced.”

“Nah, bro. Read up on the Notting Hill Carnival before you comment on this photo,” @TielaLeo tweeted, on another reply. “In my humble opinion, this is not cultural appropriation. It is cultural appreciation! That festival is a celebration of different cultures.”

“Dear Black Americans, we love the Banta knot and I don’t think Jamaicans are complaining about the bikini,” she tweeted. “Deal with your insecurities and leave Adele tf alone!”