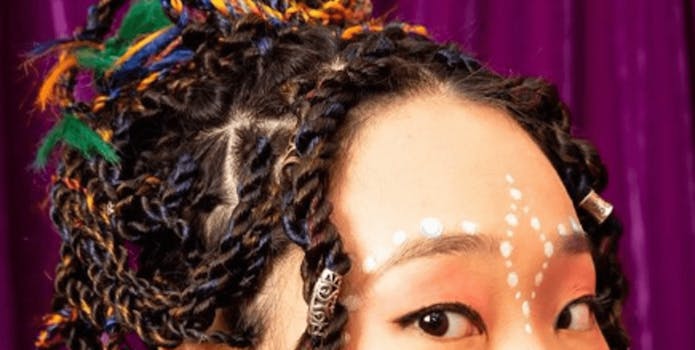 A TikTok video went viral over the weekend as viewers claimed it glamorized cultural appropriation. The video shows an Asian hairstylist with braids using various techniques to imitate type 4 hair on her client while “Dead Man Walking” by S3nsi Molly plays in the back. The TikTok is making the rounds on Twitter and Instagram, and many are saying social media is further normalizing cultural appropriation.

For every viewer who is appalled by the appropriation, there is seemingly another who wants to copy that look. A quick YouTube search will give results showing how to use Bantu knots and perm techniques to curl straight hair. Tutorials show how to use moisturizing products typically used by Black women and men to protect their hair, to achieve the perfect faux-fro.

Imitating type 4 hair and appropriating historically Black hairstyles has received attention in the media, too. While more and more Black women are proudly wearing their natural hair and fighting against hair discrimination, people who appropriate Black hairstyles and culture are starting to get called out for it.

Cultural appropriation is when certain aspects of someone’s culture are mocked and used against people of that culture, but later mimicked by others, typically white people, and lauded as cool with no respect for the origins of that trend. While type 4 hair has historically been marginalized and called “bad hair” and Black women and men have been punished for wearing their natural hair, white women like Kim Kardashian attribute cornrows to Bo Derek and are celebrated. That’s appropriation.

Social media may be worsening cultural appropriation. With social media sites like Instagram and YouTube, white people can copy culturally significant styles without learning about that style’s history or cultural origin. When celebrities appropriate looks, their influence is enormous and it can completely erase cultural significance.

This may be why cultural appropriation is especially prevalent at events like music festivals where your look is a large part of the fun. Young, impressionable people spend countless hours scrolling Instagram for festival inspiration and seeing others appropriate looks makes it seem harmless. It’s “just an outfit.”

TikTok as a platform has been called out for normalizing appropriation. Scroll through the “for you” page and you’ll likely see dozens of white teenagers appropriating Black styles and using “blaccents” for likes. Social media in many cases normalizes appropriation and makes it harder for teens to realize when they are being disrespectful.

But it’s still not black and white. Journalist Connie Wang recently investigated Japanese women imitating East L.A. “chola” culture for Refinery29 to determine whether it was cultural appropriation or appreciation. She found that while it may be easy to say it’s appropriation, she felt the respect for chola culture made it more appreciative.

As for the TikTok video of the Korean salon appropriating Black hairstyles, well, the shock and outrage it’s stirred among Black users speaks for itself.