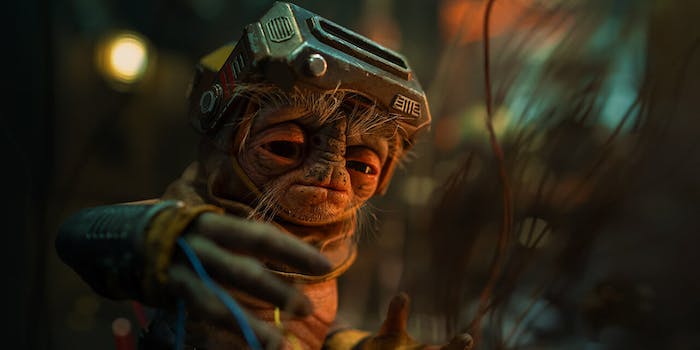 Who is Babu Frik, the adorable, teeny mechanic from ‘Rise of Skywalker’?

This tiny Anzellan is already stealing our hearts.

Star Wars has the precious, deliciously adorable alien formula down.

Between Ewoks, Porgs and even Tauntauns, Star Wars fans have no shortage of lovable aliens to obsess over. The latest trailer for Star Wars: The Rise of Skywalker unveiled the newest addition to the charming alien family: Babu Frik. The tiny, capable droid smith made an incredibly brief appearance in Monday night’s trailer, but immediately stole fan’s hearts. Now, people all over are searching for any information they can find on their new favorite Star Wars character.

Who is Babu Frik?

The most recent addition to the Star Wars family is a tiny, apparently bipedal creature that stole our hearts the moment we laid eyes on him. His tiny headgear is perfectly sized for a miniature Pinscher, and his four bitty fingers are well-protected in hardy rubber gloves. Perfect for electrical work. The character design for this new fan-favorite combines the classic look of an engineer with a pocket-sized fuzzball. Star Wars really understands its audience.

First revealed in toy form, we know relatively little about Babu Frik. He is a member of the Anzellan race, a sentient species from the reaches of space. According to StarWars.com, the diminutive fellow can “reprogram or modify virtually any droid—regardless of the security measures protecting its systems.”

We don’t know much else about him. An Anzellan droid smith, Babu has been finding work among the Spice Runners of Kijimi for an undetermined amount of time. If we are reading into the trailer correctly, he has chosen to join forces with the Resistance. With his contributions, which we can only assume will be tiny in size but massive in impact—and the First Order doesn’t stand a chance.

The tiny, whiskered Anzellan character appears to be C-3PO—and presumably R2-D2 and BB8‘s—new mechanic. Though Babu’s appearance in the trailer is incredibly brief, we did see him working away on C-3PO, indicating that he will bring his talent with droids to aid the Resistance.

Unlike the Porg, Anzellans appear to be an intelligent and physically capable race (sorry Porgs, you’re still very squishable). Fans have little more to go off of, so speculation is, of course, running wild. Some viewers believe that the mini mechanic will have a Porg-level of importance. That is, very little other than to be cute and sell lots of merchandise. Others, however, believe that the little Anzellan will play a much larger role.

“I think he is the one who repairs Kylos helmet,” Reddit user Mapafius wrote. Thanks to a leak earlier this month, many fan theories revolve around unexplained moments that have been circulating online. Some viewers believe Babu could be an enemy plant, too cute to recognize as the insidious force that he is. Most everyone else is still too busy obsessing over his itty-bitty body to focus on anything else.

There are loads of reasons the tiny creature might be included in the final film, but we’re going to have to wait until Rise of Skywalker is released on Dec. 20 to find out.