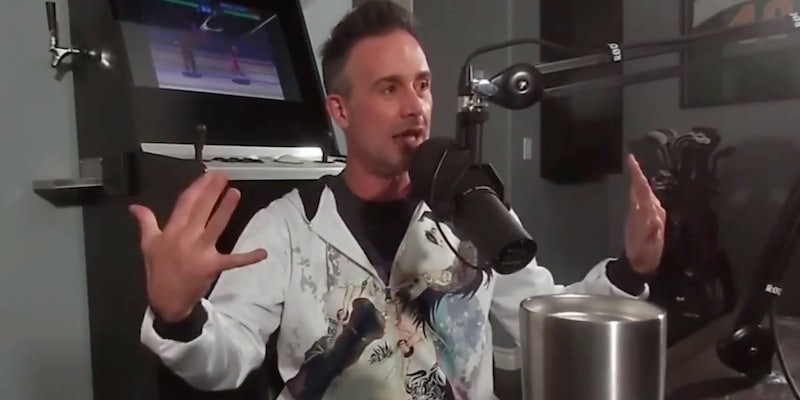 Freddie Prinze Jr. will straight-up school you about the Force don’t @ him

'Learn your Greek mythology like, I don't know, George f*cking Lucas did!'

We’re not talking a regular, seen-all-the-films fan. Prinze is a deep-cuts, deep-lore fan, well-versed in all of the intricacies of the Force and George Lucas’ wider Star Wars world. And as he revealed in an expletive-filled rant on a recent episode of Jeff Dye’s Friendship podcast, that world is aimed at kids. Thankfully, Prinze is very willing to educate the masses on what they don’t understand about Star Wars.

“The first one was for fucking kids,” he said in the podcast. “The second three were for different fucking kids, and this one is for kids. You’re just pissed off that Han Solo gave the fucking Millennium Falcon to a girl.”

After explaining that he feels most fans are angry because “the franchise isn’t aging” with them, Prinze dove into his thoughts on the matter. “Luke Skywalker is Cinderella,” he said. “Or Sleeping Beauty, OK? He can talk to things that don’t speak English and understands what they’re fuckin’ saying, he gets a fairy godfather instead of a fairy godmother who teaches him how to be the best Jedi in the world in no time fucking flat.”

@realfreddieprinze is a legend when it comes to all the stuff we love, comedy, wrestling and as shown here Star Wars. This was on an episode of #jeffdyesfriendshippodcast @jeffdye #ATCpresents

The episode in question, No. 59, is from five months ago, but the clip went viral via Instagram this week.

Blasting people who “think they get to decide,” Prinze schooled the masses on the rich, often-confusing lore behind Star Wars, beginning with the prequel trilogy. “Palpatine, you would say, and Yoda are the smartest two. Palpatine clearly smarter because Yoda was blind to the power of the Dark Side and the seduction of Anakin. So let’s talk about the seduction of Anakin fucking Skywalker for a second. … If the emperor is the smartest dude in the universe and knows that the Force dictates this, if he kills who he sees as a rival—Anakin—then he knows the Force is just going to fucking correct that.”

He noted that the assertions were “information, not affirmation.”

“These are George Lucas’ words, not mine, and so fuck you if you disagree with me,” he said, before returning to his original point. “So instead of killing Anakin, what does he do? He seduces Anakin to double the strength of the Dark Side. So then what does the Force do? It balances us, how? It gives us twins. Luke and Leia, two and fucking two. Balance.”

Prinze said that if fans can view the movies with that thought in mind, everything makes a lot more sense. “If you look at the movie through just that simple perspective,” he said, “you’ll not only know why every single bad guy loses and every single good guy loses, you’ll know who’s going to win and lose in the next fucking movies.”

Prinze’s rant then wove into character archetypes and the most common complaints from fans: “There is no Jack Bauer in Star Wars. That character doesn’t exist, it’s not Han Solo. Han Solo is a reluctant hero. That is the archetype.”

Darth Maul, a fan favorite, was the next to receive Prinze’s scathing treatment. “Darth Maul, who everyone wants to win and he’s everyone’s favorite because he looks sick and he’s great in the video games—fuck you guys! He’s Sisyphus, he is born to fail,” he said. “Learn your Greek mythology like, I don’t know, George fucking Lucas did! … He’s cursed to roll a boulder up the hill only to have it roll back to the bottom again, every single time, for eternity. That is Darth Maul’s quest. He is in on the joke, you guys. He knows it, he’s just cursed to live that life.”

Prinze went on to go after “Grey Jedi,” a term from the Star Wars expanded universe that describes a Jedi who toes the line between the Dark and Light sides of the Force. He called the idea “fan fiction,” and tore into fans who attempt to canonize the idea. His nearly three-and-a-half-minute rant finished, Prinze reasserted his initial point. “Star Wars is for fucking kids.”

We’re certainly not going to argue with him.