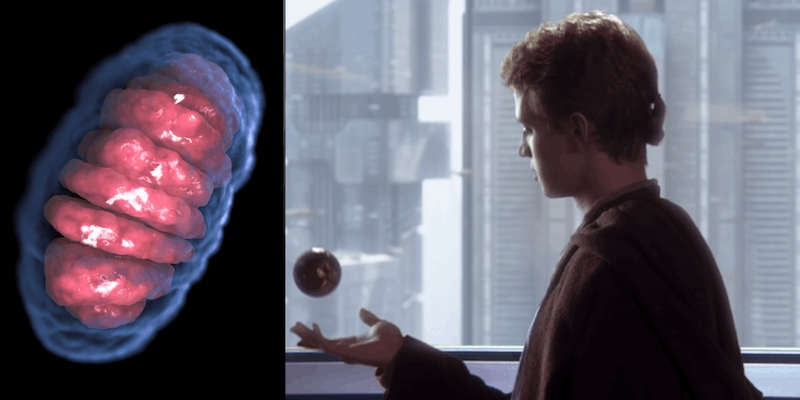 What are Midi-chlorians, the powerhouse behind the Jedi Force?

How many Midi-chlorians does it take to make a Jedi?

In the decades since Star Wars was first took audiences by storm, fans have been effectively drawn into the spectacular world created by George Lucas–populated by diverse alien races, Jedi Knights, and a mysterious energy field known as the Force. But with nearly a dozen theatrical releases to date, in addition to television series, books, and video games, the Star Wars franchise can certainly overwhelming. And one thing that tends to be confusing for many casual fans is the subject of “Midi-chlorians.”

These intelligent microscopic life forms live symbiotically inside the cells of all living things in the Star Wars universe. And although several films and books have addressed these tiny organisms, a number of questions still linger.

The concept of Midi-chlorians didn’t become part of the canon until Episode I: The Phantom Menace was released in 1999, however the idea behind these powerful little microbes is almost as old as Star Wars itself.

Lucas first came up with the idea of Midi-chlorians following the release of Star Wars Episode IV: A New Hope in 1977, while laying out the groundwork for his yet-to-be-expanded universe–decades before the origin story of Anakin Skywalker hit theaters. Although Lucas had always planned for the Force to be linked to Midi-chlorians, he simply wasn’t able to work them into the original trilogy at the time.

So while this concept was initially nearly universally disliked by fans when Phantom Menace came out, it is unarguably a part of the Star Wars lore as George Lucas intended.

So, Midi-chlorians have always been around in the Star Wars universe. While we may not have heard about them in the original trilogy, rest assured that Luke’s Midi-chlorian count has always been linked to his legendary aptitude with the Force.

Although the Midi-chlorians exist in the cells of all living things in the Star Wars universe, they tend to be detected in much greater numbers in hosts with the ability to harness the Force.

Where do Midi-chlorians come from?

Midi-chlorians come from a distant planet hidden in the heart of the galaxy. It is unknown when they were first discovered, although it’s been established that several alien races studied them long before the Jedi Order. As knowledge of Midi-chlorians spread, the Sith began studying them as well and gradually, information about these mysterious little life forms spread throughout the galaxy.

When, exactly, the Jedi first learned about Midi-chlorians is unclear, however the first blood tests aimed at detecting them were conducted by the Jedi around 1000 BBY. For nearly a thousand years, they used this method to single out candidates for Jedi training. While these tiny life forms were central to the Jedi recruitment strategy, other societies considered them a mark of stature.

And while they were technically successful, the progress led to ruin. The planet’s inhabitants gained miraculously high counts–but without the mental training to handle this new force-sensitivity, the populace lost their minds and ended up destroying themselves.

What do Midi-chlorians do?

While they’ve been compared to bacteria, Midi-chlorians are actually have more of a biologic similarity to mitochondria than a typical microbial pathogen. They exist within cells themselves, rather than in the bloodstream, as many fans once believed.

Midi-chlorians share a collective consciousness, and in high enough numbers possess the ability to boost a host’s connection with the Force. With meditation, a host with high numbers can actually “converse” with their Midi-chlorians, allowing the microbes to communicate the will of the Force.

Midi-chlorians can be detected through blood tests, which the Jedi has been known to utilize in locating potential Padawans. The presence of higher numbers in certain bloodlines was indicated in The Last Jedi, when Luke noted that “the Force is strong in my family.”

On the opposite side of the coin, some positioned in the Star Wars universe have spectacularly low Midi-chlorian counts. Han Solo, for instance, is known for having little to no connection to the Force whatsoever.