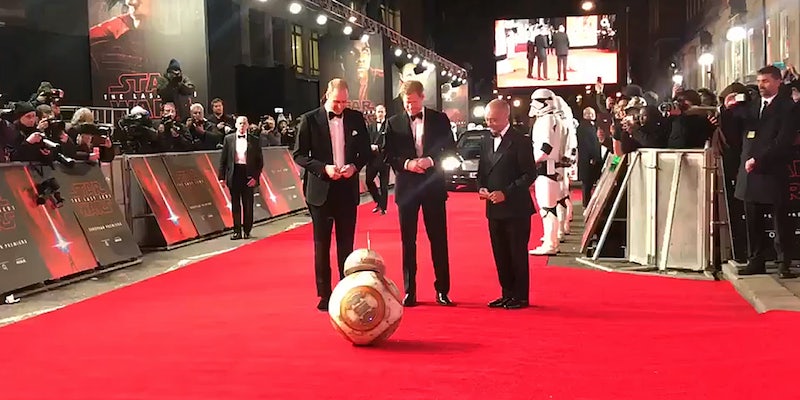 BB-8 bows to Princes William and Harry at the ‘Star Wars: The Last Jedi’ premiere

BB-8, the lovable and mischievous droid who became one of the breakout characters of Star Wars: The Force Awakens, knows how to make an entrance. But he also knows a thing or two about showing signs of respect, as a royal meeting at the premiere of Star Wars: The Last Jedi demonstrates.

The droid attended the European premiere of The Last Jedi in London on Tuesday, and although he didn’t ramp up his wardrobe for the special occasion he was accompanied by his own personal guard.

Another of the stars has arrived #BB8 #TheLastJedi -with his own bodyguards. pic.twitter.com/5zriYeeV7O

Also in attendance were Prince William and Prince Harry, who visited the set of The Last Jedi last year. Their charitable foundation is a benefit of the premiere, but they might have also been sneakily attending as cast members themselves; they’re rumored to have filmed a cameo while visiting the set.

And so it was destined that British royalty and Star Wars royalty were to cross paths. With BB-8 on British soil, he took the initiative to bow first.

The Force is strong on this red carpet! #thelastjedi pic.twitter.com/j6NYKzY3lw

No word yet if the instant connection will lead to an invitation to Prince Harry’s upcoming nuptials.