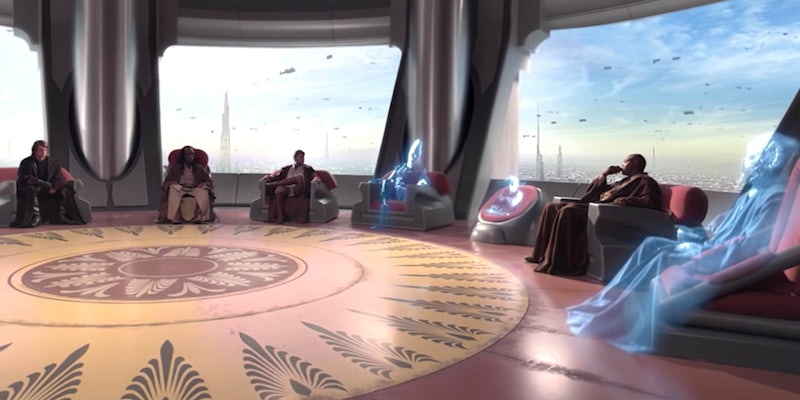 There's a lot of lore behind this noble religious order.

When George Lucas released Star Wars: A New Hope in 1977, he introduced millions of fans to a brand new universe. And over the course of the past four decades, we’ve learned far more about the rich world of Star Wars, including the Galactic Empire, Rebel Alliance, and Jedi Order–all of which come fully immersed in history and lore.

But it’s the noble and religious Jedi Order that are truly the backbone to every Star Wars story–a collection of dedicated protectors sworn to uphold the light side of the Force.

History of the Jedi Order

What some viewers may not realize is that the first Jedi Order was established thousands of years before the Galactic Empire reared its ugly head.

Jedi Knights are distinguished by their connection to the Force, as well as skill using lightsabers. They serve as guardians, promoting peace and justice throughout the galaxy.

The Jedi Order first appeared in lore around 6000 BBY (Before the Battle of Yavin) on Ahch-To. The icy planet of Ilum was obtained by the Order at its inception, which eventually became the sacred home to the Jedi Temple. This temple would go on to host the Gathering, a treasured Jedi tradition that would continue until the fall of the Order.

Ilum was also home to an abundance of kybur crystals, which makes up the lightsaber core. Young Jedi would be ferried to Ilum to gather the heart of their lightsabers, and begin their training in the Jedi arts.

Unfortunately, these crystals would eventually became a sought-after commodity, serving as fuel for super weapons like the Death Star. As such, Ilum now exists as a shadow of the world it once was, riddled with scars from careless excavations.

Eventually, the Jedi moved to make their base on Coruscant, where a new temple was built. The Jedi High Council, the highest governing body of the Jedi Order, took up residence in one of the temple’s four towers where they oversaw the efforts of the Order.

From approximately 5000 BBY through the fall of the Jedi Order, this temple served the hub of Jedi activity–however unbeknownst to the Jedi, an ancient Sith shrine existed far beneath the halls of the Coruscant temple. For generations this shrine’s insidious power seeped from it, weakening the Order more and more with each passing year.

What is the Jedi Order?

At its inception, Jedi represented the religious order aiming to uphold peace and order throughout the galaxy by following a set of foundational texts which laid out their principals. Starting out as younglings, Jedi trainees went on to become Padawans under a Jedi Knight.

If a Padawan managed to conquer their trials, then they, too, could earn the rank of Knight. But only the most impressive of the Jedi earned the rank of Master, who could go on to serve generations on the Jedi Council.

Typically, new Jedi were identified shortly after birth. Potential Jedi were discovered based on the quantity of Midi-chlorians in their blood, which indicated their aptitude for the Force. The Force, an all-encompassing energy field that binds the galaxy together, gives those sensitive to it spectacular abilities. Once trained in the Force, Jedi could gain minor precognition, the ability to manipulate minds and levitate matter.

The establishment of the Old Republic

After the Jedi moved to Coruscant, they would begin to serve what would eventually become known as the Old Republic. During these years, they worked with the Old Republic to widen their influence and fight against the evils of the galaxy.

When the Jedi declared war on the Zygerrians–an empire built on the backs of slaves–the Order expanded its influence by freeing slaves and eventually exiling the remaining Zygerrians on their home planet.

But Zygerria wasn’t the only planet to go to war with the Jedi Order and Old Republic. The warmongering planet Mandalore also butted heads with the Order due to their focus on war and expansion that went against the Jedi’s core beliefs.

Unfortunately, the Mandalorian’s expertise in war ultimately lead to the sacking and subsequent destruction of the Coruscant Jedi temple, as well as the fall of the Old Republic.

After the Old Republic fell, the Galactic Republic rose from its ashes. Ushering in a new era of peace and democracy, the Republic allowed the Jedi to shed their roles as soldiers and settle in as keepers of the peace. Lead by the Galactic Senate and its Supreme Chancellor, the Jedi worked to establish peace through non-violent mediation.

The clone army that would eventually spell out the destruction of the Jedi Order was formed during the Galactic Republic’s tenure. Jedi Master Sifo-Dyas believed that the Republic couldn’t maintain control without the aid of a military force, but was quickly removed from his position for promoting violent ideas.

The punishment didn’t stop Sifo-Dyas, however, who contracted the Kaminoans to create an army of clones that could aid the Republic when war came. Unbeknownst to Sifo-Dyas, Darth Sidious learned of his efforts and secretly implanted control chips in the clones. This laid the groundwork for the Clone Wars.

Occasionally, under the Galactic Republic, Jedi Knights served as law enforcement of sorts, by tracking down dangerous criminals and bringing them to justice. Their efforts brought about a thousand years of peace, which would unfortunately end with the Republic’s collapse.

The rise of Darth Sidious, who had all along been Chancellor Palpatine in disguise, brought about the Republic’s final days. Anakin Skywalker’s gradual turn to the Dark Side, combined with the Separatist Crisis and Sidious’ execution of Order 66, toppled the Galactic Republic once and for all.

Rise of the Sith

Years after the discovery of Ilum and the planet’s wealth of crystals, the Hundred Year Darkness struck. It was during this time that the Sith were born. The first ever Sith was a fallen Jedi Knight who came to the realization that the path to true power was not in peace and impassivity–as preached by the Jedi–but by recognizing the overwhelming power in abandoning control and accepting the Dark Side of the Force.

The fallen Jedi was quickly banished by the Jedi Order, but followers flocked to this new, powerful sect of Force-users. The Sith eventually became strong enough to wage war with the Jedi, seeking control of the galaxy.

The Sith’s ongoing war with the Jedi lasted thousands of years. Repeatedly, the Jedi assumed the Sith had been wiped out for good, only to have them reemerge. The establishment of Darth Sidious as the Chancellor of the Galactic Senate served as the prelude to the eventual fall of the Galactic Republic and the Jedi Order.

Sidious, using Skywalker, slaughtered the next generation of Jedi and tore through the ranks of remaining Knights. The execution of Order 66, which activated control chips Sidious had planted in the heads of the clone army, saw the deaths of nearly every remaining Jedi. He then established the New Order, dissolving the Republic and creating the Galactic Empire in its stead.

The fall of the Jedi Order

In the end, it was more than one factor which ultimately led to the complete fall of the Jedi Order. In addition to the slow seep of dark Sith energy through the Jedi’s Coruscant temple, Palpatine’s careful machinations–and the poisoning of Anakin’s mind–caused irreparable damage to the foundation of the Order.

But it was Anakin’s betrayal and the murders of the younglings that ultimately saw the end to an Order that had survived more than 5,000 years. When Palpatine gave the orders to execute Order 66, the majority of the Jedi were wiped out. Of an estimated 10,000, only a few Jedi survived that tragic day.

When the Galactic Empire rose, it began a policy of silence regarding the Jedi. All historical artifacts involving the Jedi Order were destroyed, as were the Jedi temples. The few remaining survivors of Order 66 were rounded up and brought to Mustafar, where they were tortured and killed.

Had it not been for the secret harboring of Anakin Skywalker’s twin children, Luke and Leia, the Jedi may never have come back from extinction.