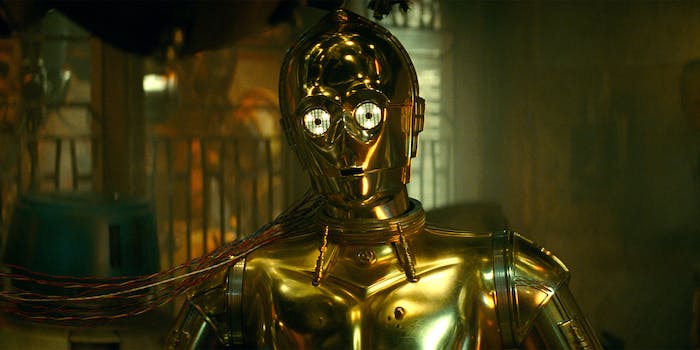 What is going on with C-3PO in the final trailer for ‘The Rise of Skywalker’?

Who would've thought we'd be so emotional over the old protocol droid?

It wasn’t much of a surprise that watching the final trailer for Star Wars: The Rise of Skywalker would spark plenty of emotions. But among the many shockers from the trailer, one of its biggest emotional moments came from…C-3PO?

Believe it. And if you haven’t watched the trailer yet, we recommend doing so for the full effect.

As one of the only characters to have appeared in all nine Skywalker Saga Star Wars films (plus appearances in The Clone Wars, Star Wars Rebels, and a cameo in Rogue One), we’ve spent more than 40 years getting to know the protocol droid. Built by Anakin Skywalker and designed to be a translator who knew over 6 million languages, he ended up becoming a much bigger player in a Galaxy Far, Far Away and witnessed some of the biggest events in its history.

We largely remember him as being, well, annoying (and often not-as-cool as R2-D2) with the knack to butt in at the world’s most inopportune moments. But his main appearance in the Rise of Skywalker trailer suggests that he’s going to be the heart of the movie—or at least one of them. He’s hooked up to some kind of machine with wires sticking out of his head, and an Anzellan droidsmith named Babu Frik is playing around with some internal configuration. We see this shot from behind as Poe, Finn, Rey, and Zorii Bliss all look on.

“What uh, what are you doing there, Threepio?” Poe asks him.

“Taking one last look, sir,” Threepio seems to reply. “At my friends.”

Chances are, there’s a little more going on in this scene than an initial watch suggests. Threepio has wires in his head in one scene, but in another, the wires are gone. Trailers—particularly Star Wars trailers—have a habit of cutting and splicing scenes together so that they don’t always align the way we think they do. (In the case of some Marvel movies, trailers are outright manipulated to include fake shots that don’t appear in the final film.)

Who is Babu Frik?

First unveiled a couple of weeks ago ahead of Triple Force Friday, Babu Frik can readily be described as small and cute. But he can also be a useful ally or a deadly enemy. According to the official Star Wars site, Babu Frik “works among the Spice Runners of Kijimi and can reprogram or modify virtually any droid—regardless of the security measures protecting its systems.”

And who is he working on? Despite the presence of BB-8 and D-O in the clip (and a glimpse of R2-D2 in another), C-3PO is the one whose life is in Babu Frik’s hands.

Why might the Resistance go to see Babu Frik?

Simply put, there could be a variety of reasons. It’s always possible that the First Order has managed to infiltrate the Resistance’s droids. He might have some issues going on internally, or he potentially got injured during a skirmish with the First Order, leading to Rey, Finn, and Poe to get him repaired; it could be why Poe gets in touch with Zorii in the first place. His red eyes might be something that needs to be repaired, but it could just as easily be a side effect of Babu Frik’s work. They might be giving the droid an upgrade so he’s more able to handle the stressful situations they’ll find themselves in throughout the film.

But Babu Frik could have an even more monumental role. He can modify a droid, but what if he could also restore memories? Threepio’s memories of what he saw and experienced in the prequel trilogy were famously wiped at the end of Revenge of the Sith, and getting them back might be a job that only the most advanced droidsmith can handle.

On top of the emotional ties of remembering Anakin, Obi-Wan, and Padmé, the reasons for bringing back Threepio’s memories might be more practical: he’s one of the few characters in the film who would have encountered and remembered Sheev Palpatine before he became the Emperor.

What about C-3PO’s ominous trailer line?

The main argument that we’re seeing several clips spliced together stems from the wires. When Babu Frik is working on Threepio, he doesn’t have wires sticking out of the back of his head. But at a different moment, he does; you can even see an old Separatist droid in the background.

Although a prevailing theory about Threepio is that he will get his older memories back, it’s possible that the opposite could happen as well. What if the reason he’s saying farewell to his friends is that his memory is about to be wiped, whether it’s because he knows too much or because he’s so damaged that he needs to essentially be reset to factory mode?

Even without the prequel trilogy knowledge, Threepio is one of the few things tying all of Star Wars together, but unlike Artoo or the Millennium Falcon in the original and sequel trilogies, we know exactly what Threepio is saying. Losing that link might be just as devastating to us, if not more, than actually losing him. He might have been annoying more often than not, but he was our annoying droid.