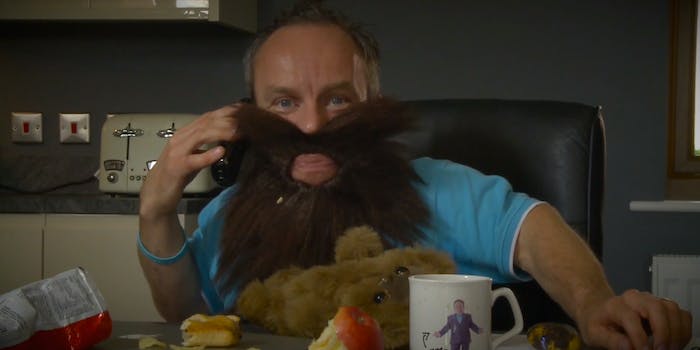 Since the end of Star Wars Celebration in July 2013, beloved Star Wars actor Warwick Davis has apparently been sitting eagerly by his phone waiting for a call from Lucasfilm regarding Episode VII. Over a year and a long beard later, Davis is done waiting!

In a short video released by the official Star Wars YouTube channel Thursday, Davis announced that he will be involved in Star Wars: Episode VII. This will be the third Star Wars film for Davis who is well-known for his role as the Ewok named Wicket in Return of the Jedi and for the few appearances he made in The Phantom Menace, including as Weazel and Wald.

Fans were thrilled to learn of Davis’ return, though there’s no word yet on exactly what role he will play in the movie.

Warwick Davis returning for Ep 7 may be the first piece of SW news I’m genuinely excited by.

My intense love of Warwick Davis as a person completely offsets my intense hatred of JJ Abrams as a person. #EpisodeVII #AllAboard

While we’re crossing our fingers for the return of Wicket and the Ewoks, we’ll just have to wait for news as we get closer to Episode VII’s Dec. 18, 2015 release. Until then, feel free to celebrate the return of Davis with the classic Return of the Jedi ending Ewok song.