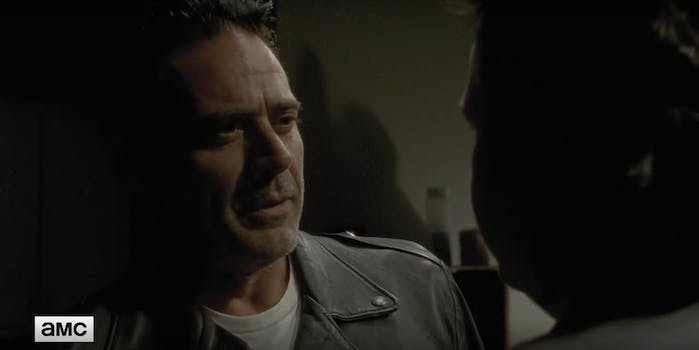 Could this be betrayal? Or is it a double cross?

Warning: This article contains spoilers for The Walking Dead episode “Hostilities and Calamities.”

After a couple weeks of decent to good episodes, The Walking Dead was back to shuffling along at a zombie’s pace this week.

Instead of telling us more about that weird Mad Max-esque group from last week, the show backtracked as it focused on exploring more of the Saviors and featured a return of the Lucille-wielding Negan. It also examined how one of Rick’s faithful, Eugene, went on the path to possibly betraying his friends. Eugene has always been a spineless character, but one who utilized his intelligence to survive. It looks like Eugene is once again tapping into that survival instinct in service to Negan.

After all, the Saviors have pickles.

I want someone to hold me the way Eugene holds a jar of pickles #TheWalkingDead pic.twitter.com/PojEo3cinr

Of course, it wouldn’t be Eugene if he didn’t fabricate his way out of trouble. Eugene clearly lies to Negan, making up previous experience and titles with the Human Genome Project to impress him—just as he did with Abraham seasons ago when he promised a cure existed in Washington, DC. It worked for Abraham, and it seems to be working with Negan. The real question is whether or not Eugene has actually committed to Negan “utterly and completely”, or whether he’s playing the long game.

From the looks of it, not everyone is convinced Eugene’s lies will stick.

When Eugene talks about being in the Human Genome Project #twd #thewalkingdead pic.twitter.com/w7qzqkFOl4

Even if Eugene is playing Negan, there’s a certain gleeful charm to the way he proclaims himself #TeamNegan in the episode’s closing moments. Eugene seems to enjoy his place within the Saviors. He has a nice, cozy apartment. He has a refrigerator full of fresh veggies. He gets his own jar of pickles, and he gets to boss people around. Toward the end of the episode, he seems perfectly at home in his new role with the Saviors.

He even seemingly rejects an offer from one of Negan’s wives to poison him. Even though Eugene admits to his cowardice, there’s an underlying uncertainty to his actions. That uncertainty seems to drive the theme of the episode. Negan is on a rampage, questioning Dwight on the disappearance of Daryl. He sets Dwight on the trail to recapture Sherry, who Dwight learns was complicit in Daryl’s escape. That revelation turned out to be one of the more emotional parts of the episode, as Dwight read Sherry’s letter explaining why she left. It turns out she couldn’t handle who Dwight had become.

Even with Dwight’s apparent transformation, he still stayed true to his word: He arrived with beer and pretzels, just as he promised Sherry. Except she was nowhere to be found this time.

when dwight took out the beer and pretzels @WalkingDead_AMC #twd #thewalkingdead pic.twitter.com/HYiQev3Jnc

If Eugene is possibly playing Negan, Dwight could very well be doing the same. Those who are familiar with the comics are probably waiting for a pivotal moment that happens with Dwight, but we didn’t see it this episode. It’s once again a slow build with The Walking Dead, as Dwight reaffirms his supposed allegiance to Negan.

While the show may be no closer to that crucial moment, it does rebuild Negan’s trust in Dwight. When it comes to The Walking Dead, the walkers aren’t the only ones playing the long game.