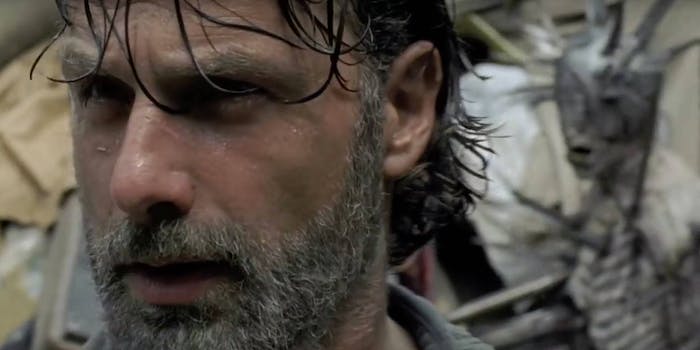 ‘The Walking Dead’ went ‘Beyond Thunderdome’ with pop culture homages

The most recent episode of The Walking Dead embraced some familiar pop culture references, ranging from Smokey and the Bandit to Mad Max. It’s the kind of stuff fans love to point out, and it didn’t take long for devotees of the show to do exactly that.

The first reference came within the first half of the episode. As Daryl and Richard exchanged some nasty fisticuffs in front of a familiar looking trailer, fans jumped at pointing out the trailer had been hauled straight from the 1977 film Smokey and the Bandit.

Am I the only one that noticed that trailer is from Smokey and the Bandit? #TheWalkingDead #DarylDixon pic.twitter.com/kWz6utGSn1

On the 1 night my husband watches #thewalkingdead and says, "That trailer is from #smokeyandthebandit " and I say "prove it" #TWD pic.twitter.com/6dGjkMNsta

While not the identical trailer from the film, it was a fun little Easter Egg nevertheless. This isn’t the first time The Walking Dead has paid homage to classic films. The show often references horror films of the ’70s and ’80s, a genre which has greatly influenced the show. A road comedy is somewhat new territory for the zombie show, unless the showrunners are hinting at a future appearance of Burt Reynolds as a zombie.

One of the most talked about homages came during the end, when Rick and gang meet a new, mysterious group. While the name of the group is unknown, the leader of the gang calls herself “Jadis.” Fans were quick to speculate on her life before the zombie apocalypse.

Unintentional homage to Galaxy Quest aside, fans couldn’t help but think of a certain road warrior. When Jadis tosses Rick down a garbage heap, he encounters and subsequently fights a trash zombie that looks like a cross between something out of Lord of the Rings and the arena-style battles from Mad Max: Beyond Thunderdome.

Gladiator walker looks like the mouth of Sauron #TheWalkingDead pic.twitter.com/6xUD4aUQzb

Jadis reminds me of a character out of #MadMax #TheWalkingDead

Was that #TheWalkingDead or #madmax? Complete with the Thunder Dome?

Some fans also pointed out the episode felt like something out of Star Trek, with the spiked walker reminiscent of the Borg.

The similarities didn’t end just with the spiked walker. The episode had a fairly distinct Star Trek vibe all around, with the weird, other-worldly cult followers, bad haircuts, and odd speech patterns. Of course, no Star Trek homage is complete without a fight to the death.

Very logical to put a Vulcan on the show #TheWalkingDead #Jadis @AMCTalkingDead pic.twitter.com/C86nGBEOiH

It might be some time before we find out how this mysterious group of future punk followers came to be, but one thing is for certain: They will help Rick fight against the Saviors. So you can bet we’ll be seeing them again, bad haircuts and all.