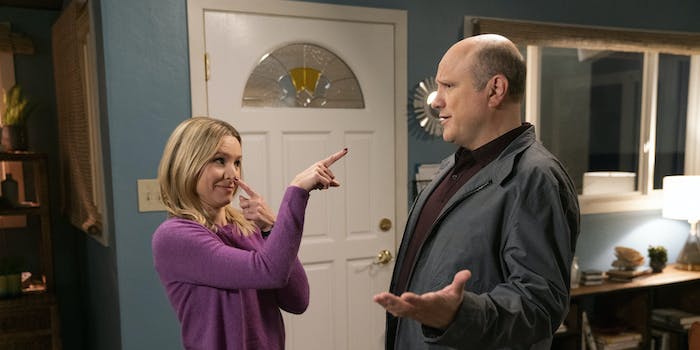 Veronica Mars returns for a long-awaited fourth season this month, and we’re happy to reveal this eight-episode miniseries is fantastic. It’s also a little darker and more adult than the original, which makes sense because Veronica is now in her thirties. So why, exactly, isn’t she allowed to say the F-word on-screen?

Speaking to TVLine, showrunner Rob Thomas explained that this decision came from Hulu. “They bought [streaming rights] to all three seasons of Veronica Mars. And because those three seasons are built to appeal to younger people, they want them to be able to watch the first three seasons [seamlessly] with season 4. That was their thinking on it.”

Basically, you’ll hear some minor swear words in the revival, but you’ll never hear an F-bomb. But rather than just sidestepping the issue on-screen, there’s a running gag between Veronica and her dad that explains why they don’t curse. It’s kind of like Kristen Bell’s current show The Good Place, where characters physically can’t say any curse words because it’s against the rules of Heaven—which conveniently means NBC can show potty-mouthed characters yelling at each other, while still following sitcom content rules.

Honestly, having watched the new Veronica Mars episodes, Hulu’s logic doesn’t really make sense. While the original was a teen show, it was always a pretty dark one that tackled mature topics from the start. And even without curse words, the revival is clearly for and about adults, featuring sex scenes and violence, and starring a cast of adults with adult problems. It’s aimed at an audience of millennials who watched the original Veronica Mars when they were teens, and it’s hard to see how a lack of F-bombs makes it more appropriate for younger viewers.