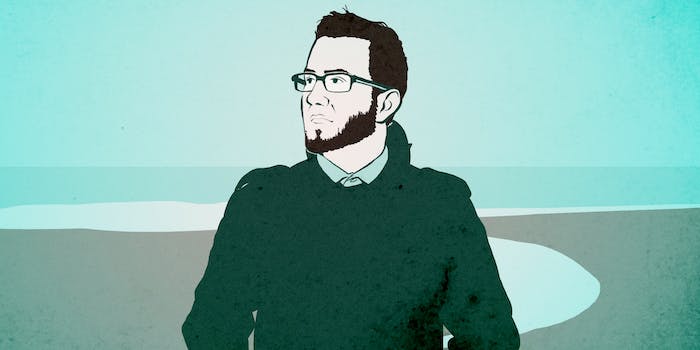 A youthful love of video games led TPR to become a musician.

Since 2014, composer Dan Collins has had a job that many gamers would consider an absolute dream. While the rest of us punch time cards and settle down at our cubicles, he composes covers of songs from games like Final Fantasy, The Legend of Zelda, and Chrono Trigger. It’s a future he never could have imagined when his father sat him down at age 6 to learn to play the piano.

“I didn’t have much say in the matter,” Collins, 29, says in an interview with the Daily Dot. “My dad found an old piano, and then…”

Despite not feeling an affinity for the instrument at first (“The last thing I wanted to be doing was playing Mozart,” he says), it eventually took over his career. Today his contemplative covers of video game music under the moniker TPR have garnered more than 10,000 followers on YouTube.

There’s nothing new about covers of video game music. In fact, the internet is glutted with them. But Collins’ work has a distinct nuance, the quiet shimmer of something perfectly happy to be itself. Rather than demanding attention with showy solos or wild reinterpretations, it wanders through the music of beloved games with no agenda. It is not in a hurry.

Collins grew up in Weymouth, England, a seaside town on the coast of the English Channel, before moving to Bournemouth as an adult. Both places are tremendously beautiful, and would inspire contemplation in even the most hardened traveler, making it easy to find echoes of the sweeping locales in Collins’s music.

Beside the seaside at West Bay

Collins put the piano aside for his teenage years, saying he saw it as “a bit uncool” to play. But when he turned 18, he found himself drawn back to it with a different composition in mind.

“I didn’t really want to play all these classical pieces, especially because they’re too complicated, all these runs and everything,” Collins said. “You go on YouTube and you see people doing covers that are very close to the original. And thats cool, but I could listen to the actual song if I wanted that, so I decided to do something a bit different and get the piano involved.”

“It all affected me—the size of the world, the characters and control and being so used to 2D,” he said. “The old games I used to play were fine, but this massive world and the music was so good. I was 10 or 11, so I don’t know if I had the full appreciation for it I do today.”

Collins posted his first Final Fantasy VII cover in September 2011. While not a lot of people noticed at first, he continued to create and produce at a steady rate. He didn’t submit his music to the popular Overclocked Remix community or try to promote it. He just gave it a quiet push onto his channel.

“I prefer word of mouth rather than forcing it down people’s throats,” Collins said. “I rather just let people find it themselves. I get such nice comments from people because they have no idea what to expect.”

Collins was a copyeditor for U.K. gaming company Imagine Publishing when he started composing. As he continued to draw fans with his music, he looked into ways to monetize and quickly found two excellent resources in Spotify and Loudr. Rather than having to obtain the licenses himself from Square Enix, Loudr took care of it for for him, a service the company can provide for any cover artist.

“Loudr deals with the publishers directly, and they take a cut from my sales and streams,” he explained. “If I dealt with the publishers directly I could save that, but it seems like a lot of hassle. I wouldn’t be able to do without them. There are licenses you can get yourself, like Songfile, but it’s a $15 fee per track. With a 26 track album, that adds up quickly.”

While Spotify has often earned negative reviews from musicians, Collins finds that his experience with them has been just fine. His albums tend to have shorter songs and a lot of tracks, and many have made playlists of them, so each streamed song helps him boost his revenue.

As Collins ventured outside Final Fantasy and toward other beloved games like Chrono Trigger, he also faced the exciting prospect of working on music full-time thanks to the money his work was bringing in. In September 2014, he resigned from his day job. He had a goal in mind: to create a following for his own original compositions too.

Collins has been writing his own music since 2007, and at one point he tried to release an album every year. The response was dismal.

“If I put a Final Fantasy cover on YouTube I got feedback and it was nice to see that people appreciated it, but put up an original and no one would like it, as proud as you would be of it, and it got me down a bit,” Collins said. “So I stopped for a while. As the covers grew more popular, I thought I could use that as a platform to write original music again.”

That strategy seems to be working. “A Moment of Weakness,” Collins’ original 2015 album, has an “unprecedented number of listens,” and he feels positive about continuing to build his fanbase with both his covers and the music he writes on his own.

Of all his video game covers, Collins loves “The Last of Us” the most, which he says is not very popular with his listeners. It was the first cover project he took on after leaving his full-time job, so it has special significance for him.

“(It reminds me that) I didn’t have to ‘go to work.’ Being at the piano is the work. It gave me more time to put more effort in,” he said.

Collins is taking a short break to bask in the year’s successes after releasing a Wind Waker tribute in June. He’s already considering an acclaimed RPG from the PS1 era for his next project, which he waved at the camera for us during our interview before laughing and begging us not to give the secret away. He’s also planning to try another original composition.

“I’d love to play live too, that’d be good,” Collins says with a warm smile. “I’ve never done that before. I hope I won’t be playing original stuff and someone yells, ‘Do Tifa’s Theme!'”