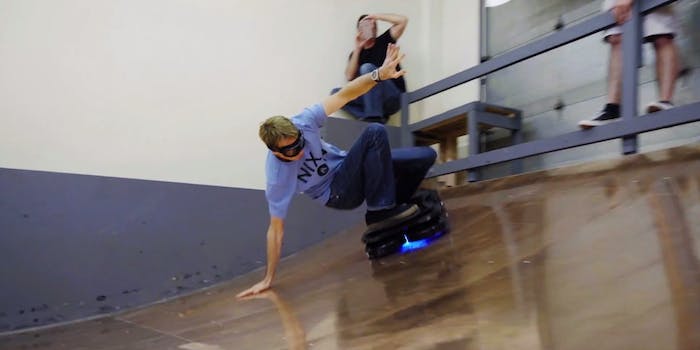 Tony Hawk takes a real hoverboard for a ride

This is no Funny or Die prank: Tony Hawk is really riding in the future thanks to Hendo boards.

It’s been quite a year for hoverboard technology. In early March, a mysterious tech company called HUVr released a video claiming it had created a working model of the long dreamt about hoverboard. But much to the disappointed of Back to the Future Part II fans everywhere, it was revealed to be a viral hoax executed by Tony Hawk and Funny or Die.

Yet, zooming around on a skateboard that defies gravity isn’t a prospect that lurks so far in the future, thanks to the folks over at Hendo Boards. The company, which launched a Kickstarter in October to raise money for their magnetic repulsion boards, had Tony Hawk and writer Dave Carnie test out the technology that everyone has wanted since Marty McFly rode one in the futuristic year 2015.

Consider this Hawk’s formal apology to the skating fans and sci-fi nerds that had their hopes dashed with the hoax back in March. As you can see from his smooth glides and sick spins, the board really does hover. Thanks to a successful Kickstarter campaign, which raised almost double its goal with 450k in contributions, pretty soon you too might be able to grab your self-lacing Nikes and take a spin on one of these bad boys.