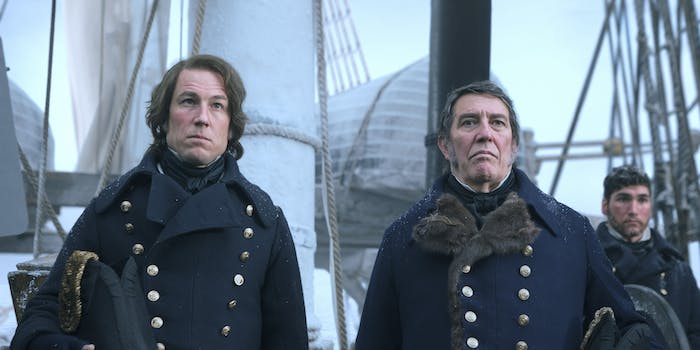 This Arctic horror series is equally great for horror fans and history buffs.

This review includes no major spoilers for AMC’s The Terror.

The Terror falls somewhere between Master and Commander and John Carpenter’s The Thing, a historical adventure series with a lurking supernatural threat. Based on the novel by Dan Simmons, it’s a reimagining of the infamous Franklin expedition of 1845, when two British Navy ships set out to discover the Northwest Passage.

The expedition was a disaster. In fact, it’s one of the most alarming stories in the history of polar exploration, a genre littered with frostbite, shipwrecks, and people having to eat their dogs. Since The Terror was inspired by historical fact (and the crew’s demise is clear from the first scene), it’s not a huge spoiler to say that Franklin’s expedition went missing. It’s famous for doing so, spawning an enticingly gruesome mystery.

Lost in miles of bleak ice in northern Canada, the two ships weren’t found until 2014 and 2016. Everything else we know comes from Inuit oral histories and scraps of archaeological evidence, leaving plenty of room for juicy speculation. The Terror follows the expedition’s journey from heroic venture to nightmarish catastrophe, with a stellar cast and only one significant flaw: The monster isn’t really necessary.

Dan Simmons’ novel invented a supernatural creature to stalk the crew, acting as a metaphor for Britain’s hubristic encroachment on foreign land. It unleashes gory violence and sets the men against each other, following the tradition of movies like Alien and The Thing. And while I enjoy a monster as much as the next horror fan, it ultimately feels extraneous to the story. If anything, the creature makes things less scary. It’s as if a poltergeist showed up halfway through The Martian, interrupting Matt Damon’s struggle against a painfully realistic demise.

Granted, the monster is probably why AMC greenlit the show in the first place. It slots The Terror neatly into the horror genre, rather than selling it as pure historical drama. But to be honest, the Franklin story was already frightening enough. Lost in the ice with dwindling supplies and no hope of rescue, the scenario is akin to apocalyptic horror. And that’s before we get into the seriously disturbing stuff, which really would be a spoiler.

The Terror isn’t just an on-the-nose title; it’s the name of a ship. HMS Erebus and HMS Terror were built to be Naval bombers, and their thick hulls made them ideal for ice-breaking. Their history mirrors the makeup of the Franklin expedition crew, many of whom were not, strictly speaking, explorers. By the 1840s, Britain was a colossal naval power with no more wars to fight. To keep the ships busy (and to bolster British imperial patriotism), they were sent on exploratory missions. The Northwest Passage was a particularly hot ticket, offering fame and glory to the first crew who made it through.

There’s a classic trope of soldiers being led to their doom by naive and puffed-up officers, and in The Terror this originates from historical fact. At 59 years old, Sir John Franklin came out of retirement after an unsuccessful stint as the governor of Tasmania, determined to cement his legacy by charting the Passage. On paper, he was a seasoned captain, armed with the characteristic singlemindedness of all great explorers. However, experience isn’t the same as success. Earlier in his career, his most famous mission ended in death by starvation for half the party. And, allegedly, cannibalism.

Ciarán Hinds is perfect as Franklin, playing him as a well-meaning fool. You can imagine him as the stern but kindly headmaster of an English boarding school, but when you’re trapped in Arctic ice for months on end, blithe optimism can be lethal. While Franklin reigns supreme on the Erebus, he begins to clash with the Terror’s Captain Crozier (Jared Harris), a more pragmatic figure with extensive polar experience. With his jovial promises of glorious victory, Franklin easily wins the hearts of both crews. Crozier is the bad cop; a dour, alcoholic Irishman whose realistic concerns fall on deaf ears. In horror movie parlance, Franklin is the idiot who persuades everyone to break into a haunted house. Crozier is the unpopular nerd who suggests an exorcism.

The Terror’s strongest character moments explore the psychology of leadership. The strict military hierarchy demands total obedience, with commanders providing a sense of certainty in return. Crozier is the kind of man who strategically lies to his crew for their own good, whereas Franklin lies to himself. He buys into his own image as a heroic leader; a microcosm of the myth of British superiority. Through contemporary eyes, he’s almost absurd. His crew are blatantly unprepared, even down to their uniforms: starched collars, wool overcoats, and gold-tasseled epaulettes. We even get Tobias Menzies (the Brutus to Ciaran Hinds’ Caesar in Rome) in a quintessentially posh Tobias Menzies role, playing Franklin’s second-in-command, James Fitzjames.

In the not-so-recent past, the Franklin tale might have been adapted as a heroic tragedy. Structuring it as a horror story is a clever twist, especially in the context of post-colonial critique. The Terror pays homage to the “Native American burial ground” subgenre of horror movies, framing the expedition as interlopers on Inuit territory. I have mixed feelings about how this panned out. On the one hand, Inuit people played an integral role in Franklin’s legacy. They’re also frequently overlooked when discussing the history of Arctic exploration. The more successful European explorers often thrived by adopting Inuit survival techniques; something The Terror highlights by contrasting the British crew with Inuit characters.

Crozier, the sensible one, speaks Inuktitut and can therefore communicate when they come across an Inuit woman (Nive Nielsen). Most of the others view her as an annoyance or a threat, spurred on by racist anecdotes of Native American attacks. The show makes it clear that the explorers are a disruptive influence on the environment, inviting disaster upon themselves. At the same time, The Terror isn’t exactly breaking new ground with this trope. While it includes Inuit characters, they’re still in the vein of “mysterious shaman who warns the white men about an ancient evil.”

Given that the most terrifying account of the Franklin expedition came from Inuit sources, realism might have been a better angle than shamanic fantasy. Still, Nive Nielsen gives a compelling performance in what could’ve been a thankless role: a woman with barely any dialogue, surrounded by men. It’s actually a great example of how predominantly male casts aren’t intrinsically sexist. Of course, the story focuses on men; it’s set on a Victorian naval expedition. But the creators find ways to include women without resorting to tedious “Oh, how I miss my beautiful wife” flashbacks. (The wife flashbacks are thankfully well-characterized.) We even get some sly mansplaining humor, as the Inuit woman disdainfully ignores one-sided conversations in a language she can’t understand.

Produced by Ridley Scott and created by David Kagjanich and Soo Hugh, The Terror is meant to attract AMC’s audience for The Walking Dead. I’m reliably informed that The Walking Dead went down the toilet last season, so now is an ideal time to switch over. As long as you have a strong stomach for 19th-century surgery and gory deaths, The Terror holds ample appeal for both horror fans and history buffs. It’s genre TV with the tight, character-driven storytelling of a historical prestige drama, and as a polar history aficionado (could you guess?) I have only one persistent criticism: The actors don’t seem cold enough. It’s -40 degrees, people! We should see more shivering, at the very least.

The Terror premieres March 26 on AMC.