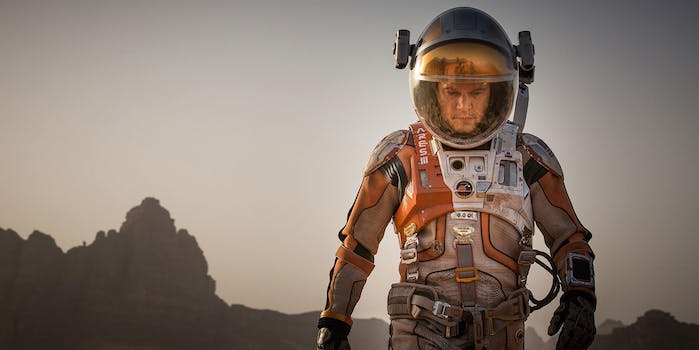 'The Martian' is the ultimate movie for DIY geeks—and it's surprisingly hilarious.

After several years in the doldrums, Ridley Scott has turned out a movie so entertaining and smart that it almost rinses out the lingering taste of Exodus: Gods and Kings.

Instead of turning Andy Weir’s The Martian into a schmaltzy Hollywood survival epic (a result that is all too easy to imagine), Scott clearly understood what made the book so popular in the first place: death-defying DIY and a lot of cursing. While it gives us all the muscle-clenching thrills of space movies like Interstellar and Gravity, the thing that really stands out about The Martian is its humor.

Left for dead after his team evacuates their temporary research base on Mars, astronaut/botanist Mark Watney (Matt Damon) has to survive for four years until the next manned mission shows up. This could easily have been portrayed as a harrowing tale of loneliness and desperation, but Watney’s determination and dry sense of humor shine through.

“I’m gonna have to science the shit out of this,” he says in an early installment his daily video diary, and proceeds to set up a potato farm in an indoor field made from Martian dust and poop. From then on it’s DIY or bust.

The pleasure of The Martian is akin to watching a cooking show or something like Mythbusters. It’s true geek entertainment, not just in the sense that it’s science fiction, but because it’s about a group of smart, competent characters solving problems that pan out like lethal brain teasers. How do we make water on Mars with nothing but these random instruments left behind by the previous research team? How can Watney communicate with Earth using a single revolving camera he dug out of the dirt? How do you fix a spaceship using duct tape and a tarp?

Considering the film’s convenient release date, just after NASA’s recent Martian water announcement, you have to wonder how many NASA PR people are high-fiving each other right now. The Martian is basically an advertisement for the ingenuity of NASA scientists, ranging from Watney’s survival skills to the excellent supporting cast that tries to help him via satellite from Earth: Chiwetel Ejiofor, Jeff Daniels and Kristen Wiig, to name just a few.

Refreshingly, there are no villains here. When your story is about someone who is almost certainly going to die 34 million miles away from home, there’s no need to add excess conflict. Instead the main characters share the kind of affectionate teasing and teamwork usually reserved for movies like Ocean’s Eleven and the Fast & Furious franchise, as Watney’s teammates crack jokes and email playful insults back and forth across the void.

The Martian is already receiving a lot of praise for its scientific accuracy, but the thing that makes it feel truly realistic is the humanity of its characters. They swear at each other, they listen to cheesy disco music, and they hide their stress beneath a protective layer of Lord of the Rings jokes and pragmatism. The visual design may not be quite on the same level as an epic like Interstellar (or indeed like Prometheus, which in most regards is The Martian‘s inferior), but that doesn’t seem to matter in the face of the genuine elation we feel as Watney repeatedly saves himself from certain death.

This combination of relatability and intelligent science fiction is what makes The Martian a strong contender for Ridley Scott’s best movie since Blade Runner.