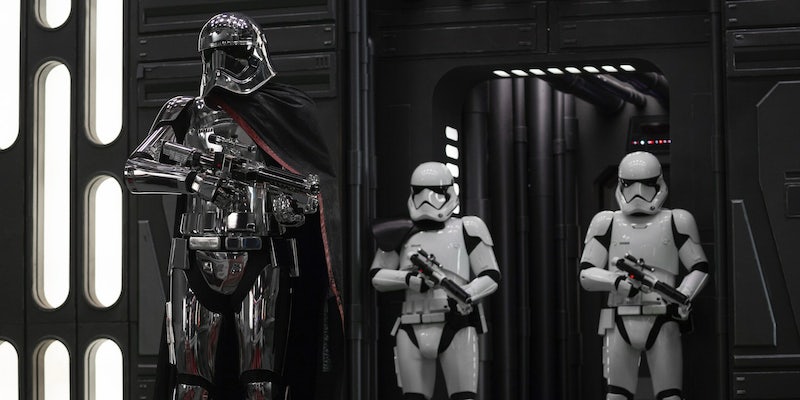 ‘The Last Jedi’ backlash ‘campaign’ demands to be taken seriously

More than six months after the theatrical release of The Last Jedi, just about every aspect of the backlash against it has already been argued and debated to death. But that hasn’t stopped old arguments appearing in new formats.

Last week, we saw an almost certainly fake campaign “raise” millions of dollars to remake a film that earned more than $1.3 billion at the box office. This week, we’re seeing a “manifesto” written by “We the fans of Star Wars” go viral several weeks after it was originally posted. The emergence of the post, which didn’t get that much traction when it was first posted, is almost solely so people can mock it.

The creators of the manifesto believe that “those in charge of a Franchise derives its power as a creative force from the consent of the fandom of that Franchise.” The creators take umbrage with the direction that Lucasfilm has gone since being purchased by Disney and the perceived “misguided political agenda” that it’s pursuing with the new films. It includes grievances against The Last Jedi and the newer films as a whole, characterizing the films as desecrating the legacies of characters we’ve known for decades. And they certainly have an issue with people assuming that they’re racist, sexist, or part of the alt-right for disliking a movie.

“To these ends, we pledge our merchandise, our honor, and our wallets,” the manifesto stated in its final line.

These Star Wars fans, you see, demand to be taken seriously.

This faction of Star Wars fandom, who have been shouting into the void that is the internet for months about how much Rian Johnson, Kathleen Kennedy, and The Last Jedi ruined Star Wars, want you to know they are being reasonable (while using alarmingly familiar language to do so). They want a dialogue. They want to talk with those creators even after some fans reportedly drove a cast member offline after months of sexist and racist comments. They just want a politics-free Star Wars.

Except there’s one problem.

For one, Star Wars has always been political long before some fans latched onto the idea that having an inclusive cast or casting more than one woman in a movie is inherently adhering to a political agenda. (It’s not a political agenda to have a fictional universe begin to reflect our own in front of and behind the camera.) Lucas has long said that Star Wars was anti-authoritarian. The original trilogy was released just a few years after the Vietnam War, whereas part of the prequel trilogy came out during the U.S.’s invasion of Iraq as the Republic became complacent and allowed the Empire to grow. The Galactic Empire, as originally designed, was a stand-in for global empires like the U.S. and England.

The sequel trilogy has certainly found resonance in these times. And even if that link wasn’t originally intended to resonate the way it does, there’s a familiarity that people recognize in the idea of history repeating itself and a new threat growing in the shadow of an old and extinguished one.

The Last Jedi backlash, whether it’s in the form of a Twitter thread, a petition, a trollish crowdfunding effort, or a manifesto, is also emboldened with the idea that Johnson, Kennedy, J.J. Abrams (who is directing Episode IX), Lucasfilm or Disney owe them something because they paid to see the movie or purchased merchandise.

Lucasfilm is beholden to the corporations that give them hundreds of millions of dollars to make blockbuster films, and it’s certainly more beneficial when films are critical and financial successes. All of the Star Wars films released under Disney have done that, although Solo is admittedly less so. Fans can voice their concerns about how Luke was handled or the truth behind the reveal of Rey’s parentage, but none of the creators are obligated to follow through with any of them. (For example, calls for a woman to be the main director of a Star Wars movie have yet to be fulfilled.)

And it’s not like Lucasfilm and Disney haven’t heard the complaints. Johnson, for example, had been particularly patient with the contingent of Star Wars fans who decried him for ruining their childhoods for months. He started addressing the backlash just a few days after the film’s release, and he’s active Twitter and other social sites, where he interacts with fans. But it wasn’t until Kelly Marie Tran’s exit from Instagram that he started to call some of the more vitriolic behavior out. Now, he’s outright trolling them.

Star Wars has never been a monolith of a fandom even when there weren’t as many characters to follow or women had to be satisfied with one major female character throughout an entire trilogy. For every issue that the manifesto lists, there are plenty of people who love the franchise for exactly those reasons. For some, the inclusion of new characters like Rey, Finn, Poe, and Rose is why they’re now Star Wars fans. For all of the words spelling out just how much The Last Jedi ruined Star Wars, the manifesto fails to take in an important concept that yes, it’s their truth—but only from a certain point of view. (There was even a subplot in The Last Jedi all about how two different people can view the same moment differently.)

At the end of the day, nobody is making anybody rewatch The Last Jedi. They can choose to drop the series or pretend it doesn’t exist after The Force Awakens. They can write their version of The Last Jedi where Luke is the hero they want him to be, Rey is secretly a Kenobi or a Solo or Skywalker, where Snoke has a master plan, or even where Poe was right and Holdo was wrong; chances are, it might even be taken more seriously than other pieces of fanfiction.

Yes, having a long-awaited film, or a fandom, or creators you’ve admired or respected not hit the mark sucks. Being in that minority is not fun. Seeing most of the internet getting excited over something you were disappointed can even be isolating. But there’s also—and always has been—a difference between not liking something and using that hatred to harass the people who do like it, as well as those who worked on it.

Saying “I didn’t like Rose Tico but” or justifying how your hatred of The Last Jedi because of its female characters doesn’t make you racist or sexist is just a strawman argument. These fan debates have been taking place for months, and the majority of fans have been able to have these discussions with ease and without resorting to the tactics that a small and vocal minority have. (They certainly have never written a manifesto making demands of Lucasfilm and Disney or tried to raise enough money to remake the film.)

Given that it’s been six months since the movie came out, many of them have moved on to criticizing the next thing or watching something they love. There’s a lot of media out there to consume, so Kylo Ren’s advice to Rey to “let the past die” is not only a sage piece of advice for fans, it’s also a practical one. There are plenty of other things to explore in the galaxy, so why keep letting hatred of one movie consume you?