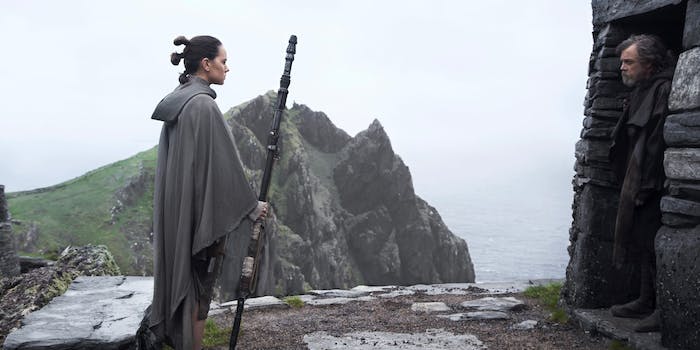 ‘Star Wars’ manbabies are trying to remake ‘The Last Jedi’

Aren't there better things to raise money for?

It’s been more six months since the theatrical release of Star Wars: The Last Jedi, and for some viewers, the anger over the divisive film is still rife enough that there’s now a campaign to remake the critically acclaimed film.

A Twitter account created within the last week launched a campaign to remake The Last Jedi, which caught traction online after a tweet posted Wednesday went viral. A website dedicated to the cause features the final scene of The Force Awakens where Rey meets Luke Skywalker, except The Last Jedi director Rian Johnson’s face is placed on Rey while George Lucas’ face is placed on top of Luke’s. And instead of a lightsaber, a script with “REMAKE” stamped on it is being handed over.

Our team of producers is offering to cover the budget for a remake of The Last Jedi in order to save Star Wars. Share this and spread the word to let @RobertIger & @Disney know you want this! This isn't a joke, we're ready to have the convo now! #RemakeTheLastJedi #StarWars

“This is a campaign to provide Disney an opportunity to course correct with the Star Wars franchise,” the website states. “The fans are completely divided and the core goal of Star Wars has been abandoned. The goal is to not make one half of the fandom happy over the other, it is to make a film that the fandom in general as a whole enjoys.”

The setup raises more than a few suspicions—if, in fact, the campaign to remake The Last Jedi is a genuine one. It’s highly likely that this could be a giant troll. The campaign claims that it has producers who will cover the budget but has a Google Form for people to fill out and pledge money. (The form only asks for your email address and a pledge ranging from $10-$10,000 but no personal information or forms of payment.)

As of this writing, $25.9 million has reportedly been pledged to the campaign, but there’s no way to tell how much of those pledged funds are genuine versus people trolling the campaign. There are nine different reward tiers, but there’s no indication on how those rewards will be fulfilled.

Of course, all of this is probably moot anyway. There’s no pretty much no way that Disney is going to remake—or even entertain the idea of remaking—a Star Wars movie that was critically acclaimed, received four Oscar nominations, and made the company $1.3 billion. Not to mention the unfeasibility of getting the cast, which is about to start working on Episode IX, to agree to be involved or all of the legal headaches that would emerge from this venture.

Yo I’m very confused as to what your goal is here. You literally want to spend 200 million dollars remaking the last Jedi? And someone is giving you that money? I don’t get it.

How did you get investors without a script or stars or director or legal ability to make this movie? Those have been important elements in the past.

The Daily Dot’s list of questions sent to an email address associated with the campaign has gone unanswered.

Johnson, for his part, is taking in the campaign to remake his movie in good fun, even egging the people who hate the movie on even further.

Frank Oz, who returned as Yoda in The Last Jedi, publicly shamed the fans for pledging their money to remake The Last Jedi instead of putting that money to good use.

Star Wars fans are having a field day of their own as they come up with fun and outlandish ideas for a Last Jedi remake.

Regardless of its intent, the campaign taps into more of the vitriol and toxicity that’s been a near-constant presence from a small but vocal section of Star Wars fandom. Film criticism is a good thing, and The Last Jedi, like any other movie, isn’t without its flaws. But while some fans have been able to voice their concerns and engage in civil discourse on the issue, a vocal minority has attacked the cast and crew of the movie for the better part of six months and often taken it too far.

Now they’re demanding a new movie, one that caters to a certain group, because they didn’t like aspects of the first one. There’s a sense of entitlement in expecting a movie that fulfills everything on a checklist—and in trying to raise money for a remake that will never be made.

But ironically, the campaign has already brought the version of The Last Jedi it dislikes back into the conversation. For a six-month-old film to be getting this much attention in the middle of summer blockbuster season (and amid everything else happening in the news), it must have done something right.