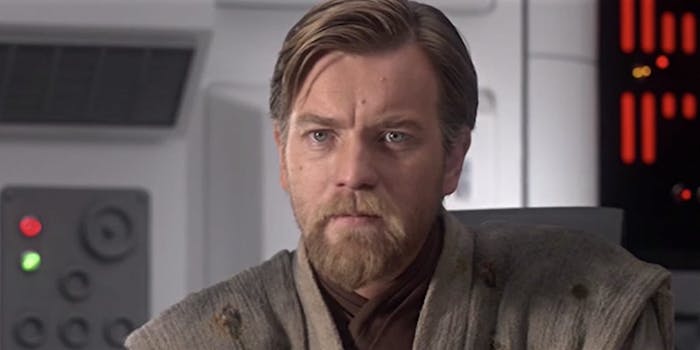 Lucasfilm is holding off on making more Star Wars spinoff films and focusing on the Skywalker Saga and future trilogies instead, according to a new report from Collider.

The decision by Lucasfilm could affect rumored standalone Star Wars spinoffs starring Obi-Wan Kenobi and Boba Fett, which have reportedly been in the works for some time. It also affects any potential sequels to Solo: A Star Wars Story. Although not confirmed by Lucasfilm, the announcement implies those projects are no longer in development (and it’s not unusual for films revealed to be in development to not be made).

The news, however, won’t affect the previously announced Star Wars trilogy from Rian Johnson or the Star Wars films from Game of Thrones showrunners David Benioff and D.B. Weiss. Jon Favreau’s live-action TV show doesn’t appear to be affected, either.

For now, the only Star Wars film confirmed with a release date is the upcoming Episode IX, which will debut Dec. 20, 2019.

Lucasfilm’s move to discontinue the standalone films is possibly tied to Solo’s performance at the box office. Although Solo has made more than $194.8 million at the box office domestically (and is the fifth highest-grossing film of 2018 to date), it’s been seen as a disappointment compared to other recent Star Wars releases.

The Force Awakens made more in its first weekend than Solo has to date, whereas Rogue One: A Star Wars Story made more than $155 million on its opening weekend and went to earn more than $532 million domestically. Timing may have been a factor: Solo was released in late May, in the middle of the summer blockbuster season, compared to the other three films, which all got December releases.

Following Solo’s box office performance, the debate over Star Wars fatigue surfaced as some fans questioned whether a Han Solo movie was necessary. Solo and Rogue One, plus the would-be Obi-Wan and Boba Fett movies, take place during the 19 years between Revenge of the Sith and A New Hope. They’re intended to fill in gaps between some of the galaxy’s big events and delve into its biggest characters.

While Rogue One works for fans and critics largely because of the new characters it introduces (before killing them off), Obi-Wan and Boba Fett movies could easily fall into the same trap as Solo: giving us a story we didn’t need. Obi-Wan and Boba Fett’s stories are already expanded in The Clone Wars. And between Star Wars Rebels and the official Star Wars comic, we’ve already filled some gaps in Obi-Wan’s timeline, like what he did after watching over Luke Skywalker on Tatooine.

We don’t know how much work was put into the proposed movies before Lucasfilm reportedly put them on hold, but the projects already limited how expansive the Star Wars galaxy could be. By focusing on the same 19-year timeframe as Rogue One and Solo and with characters we’re more than familiar with, we’re missing out on what’s beyond the horizon of Tatooine or Boba’s seedy criminal underworld.

The 30-year gap between Return of the Jedi and The Force Awakens could be a potential alternative playground, as the upcoming Star Wars Resistance animated series will likely demonstrate. And while it’s possible that Lucasfilm may produce more Star Wars anthology movies in the future, it will have more to work with once it looks beyond fan favorites.