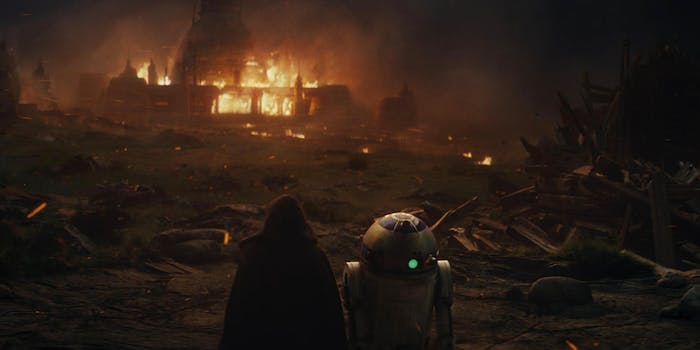 'When I talk about the negative stuff, that's not the full picture of the fans at all.'

Warning: This article may contain minor spoilers for Star Wars: The Last Jedi.

After Star Wars: The Last Jedi had the second-largest opening weekend at the box office ever, director Rian Johnson is opening up about one of the emerging narratives coming out from the film—one that has more to do with the film itself.

Although The Last Jedi has garnered mostly positive reviews from critics, audiences have been split. The movie received an A from CinemaScore and scored 89 percent on ComScore/Screen Engine, but Rotten Tomatoes tells a different story. The site’s aggregation of critical scores tallied to 93 percent, but audiences have it sitting at 55 percent, which is comparable to audience scores for the Prequel Trilogy. (It’s unclear how many fans who rated the movie poorly have seen it and how much of it is due to fans purposefully bombarding Rotten Tomatoes with negative reviews.)

Some fans had gripes with the movie in regards to pacing, certain plotlines, the destruction of fan theories years in the making, and how it treated some of the major characters, resulting in both nuanced and contentious post-screening conversations. Some fans accused Johnson of “ruining” Star Wars and certain characters, taking their vitriol straight to him on social media, while others are going so far as to petition Lucasfilm asking that The Last Jedi be removed from the Star Wars canon.

Speaking with Business Insider after the theatrical release of The Last Jedi, Johnson noted that he understood where fans were coming from. After all, he’s been a Star Wars fan his entire life.

“I’m aware through my own experience that, first of all, the fans are so passionate, they care so deeply—sometimes they care very violently at me on Twitter,” Johnson said. “But it’s because they care about these things, and it hurts when you’re expecting something specific and you don’t get it from something that you love. It always hurts, so I don’t take it personally if a fan reacts negatively and lashes out on me on Twitter. That’s fine. It’s my job to be there for that.”

Like many fans observing and engaging in the discourse after seeing The Last Jedi, Johnson knows that people had major expectations for his movie, which he first wrote before the release of The Force Awakens. Fans had questions that they were looking forward to having answered, and they wanted to see certain characters’ backstories brought to the big screen. Other fans wanted to see the kind of plot and themes that Johnson did write and film. Johnson acknowledged a bigger point of the impossible expectations of a Star Wars movie: Even if he had tackled certain mysteries the way detractors wanted him to, he would still be on the butt end of backlash from a different set of fans.

But even with the Rotten Tomatoes score discrepancy and backlash dominating the conversation after the movie, Johnson notes that it’s only a small portion of the feedback he’s received.

“There’s been a lot of joy and love from fans,” he said. “When I talk about the negative stuff, that’s not the full picture of the fans at all.”