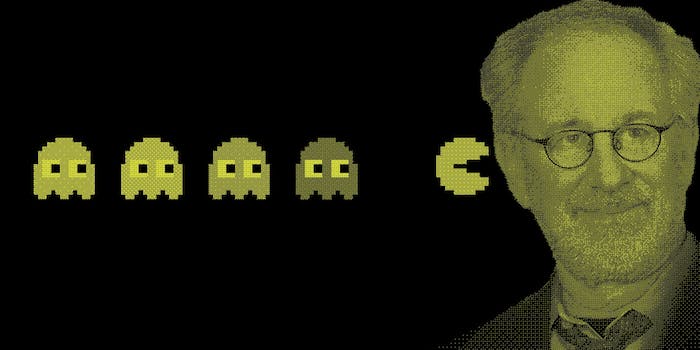 Get ready for a romp through 1980s references and VR gear.

Director Steven Spielberg is one of many cultural icons referenced in the geek novel Ready Player One, and soon, he’ll be directing the nostalgia-filled book’s film adaptation.

Ready Player One, written by Ernest Cline, could be described as Willy Wonka & the Chocolate Factory meets Neuromancer. The young-adult novel takes place in 2044, when people escape from the dirty, devastated world by jacking into a virtual reality simulation called OASIS. When the creator of this VR universe dies, it kicks off a hunt for a prize that will give the winner total control over the entire OASIS simulation.

Guess what? Steven Spielberg is going to direct Ready Player One! And I'm going to have a massive coronary. http://t.co/IWILQQTV3a

Ready Player One is a book aimed squarely at the original gaming generation—those people who grew up with an Atari 2600 in their living room. This audience was certainly not comprised mainly of young adults when the book was released in 2011. The novel features rich kids racing against scrappy, poor children to find the prize; frustrated nerd romance; and clues about the location of the prize that are awash in 1980s cultural references.

Ready Player One has also become iconic in the larger geek-culture world as well. With Spielberg at the helm, the OASIS simulation is sure to boast the highest production values, and with the most recent version of the script written by Zak Penn—who wrote X-Men 2, X-Men: The Last Stand, The Incredible Hulk, and The Avengers—we imagine this will be a film for all ages, one that older gamers can enjoy with their children.

The only concern remains whether Warner Bros. can secure the rights to all the intellectual property tied to the cultural references in the film. Critics are also wondering whether the studio could incorporate virtual-reality technology, such as the Oculus Rift or Steam VR, into the project.

No release date has been set for Ready Player One‘s film adaptation.