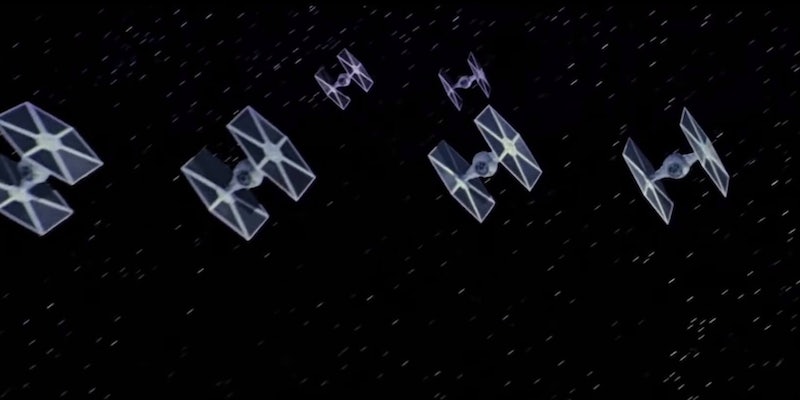 These are the 10 best ‘Star Wars’ ships

Do you prefer the iconic look of Slave One, the classic design of a TIE fighter, or the sleek appeal of a Naboo Starfighter?

Through the years, fans of George Lucas’ sprawling galaxy have become familiar with the characters, planets, and creatures of the Star Wars universe. We’ve also come to recognize many of the ships that frequent these blockbuster films. Many fans could pick a TIE fighter or X-Wing out of a line-up, but many of other Star Wars ships that have shown up throughout more than 40 years worth of films, television shows, video games, and books are less recognizable.

It’s tough to decide which of the Star Wars ships are the best. The Millennium Falcon is a well-known favorite, but does it have the speed or maneuverability of a Y-Wing, or even Boba Fett’s Slave One? While all of the ships in Star Wars have their own redeeming factors, there are some that rise above the others. Whether due to their popularity among fans, their performance as a spacecraft, or overall design–here are the best Star Wars ships.

Any list of Star Wars ships must start with the Millennium Falcon. It did make the Kessel Run in less than 12 parsecs, after all. This heavily modified ship first appeared in 1977 when Star Wars: A New Hope hit theaters and ever since, Star Wars fans have been obsessing over Han Solo’s famous star ship. The Millennium Falcon was a core element to not only Star Wars episodes four through six–but also to The Force Awakens and, of course, Solo.

The Falcon has changed hands plenty of times over the years. Lando Calrissian famously lost the ship to Han Solo in a game of cards years before the events in A New Hope. It might not look like much, but this Star Wars ship is full of surprises. Packed full of smuggling compartments and fully equipped with twin AG-2G quad laser cannons, the Millennium Falcon is far from the “garbage” Rey claims it to be in The Force Awakens.

Boba Fett’s unique ship caught the attention of fans when it first appeared onscreen in The Empire Strikes Back. The inspiration for this most oddly-shaped of Star Wars ships came from a radar dish, according to the assistant art director and visual effects creator who worked on the film.

Despite his minimal lines and relatively brief screen time, the character of Boba Fett is a fan favorite, so it only makes sense that his ship would be popular with fans as well. Slave One is also equipped for battle with cannons and projectile launchers at the ready. The ship’s strange shape has been compared to a streetlamp, as well as Boba Fett’s iconic Mandalorian armor. It might look strange—and logistically make very little sense—but Slave One will always have a place in our hearts.

The Death Star, which was introduced in A New Hope, is a beast of a space station. At over 100 km in diameter, this massive station required more than a million military personnel and hundreds of thousands of droids just to keep it running. Using the same kybur crystals that fuel Jedi lightsabers, the Death Star is a tool of devastating power, as evidenced by Governor Tarkin destroying the planet Alderaan with one of its powerful lasers.

This absurdly large space station seemed all but unstoppable until a team of Rebels stole the schematics for the super weapon and passed them onto Princess Leia. By exploiting its only weakness—an exposed particle exhaust vent leading directly into its reactor core—Luke Skywalker was eventually able to completely destroy the Death Star.

One of the most visually stunning space crafts on this list of Star Wars ships belongs to Kylo Ren. First appearing in the sequel film The Force Awakens, Kylo’s Upsilon-class shuttle is functionally similar to a Lambda, which makes an appearance later on this list. It boasts enough space for a crew of five, as well as ten passengers. When landing, the wings of the shuttle swoop up and partially retract, giving the appearance of a predatory bird.

Twin laser cannons decorate the sides of this sleek Upsilon-class ship, with advanced sensors to monitor enemy communications and avoid combat when necessary. The military-focused design makes this shuttle an excellent cross between sleek transport and capable war machine. Plus, it looks cool as hell.

The design for the Star Destroyer has endured decades of Star Wars releases. The opening moments of A New Hope sees one of these behemoths soar past, mesmerizing in its sheer vastness. With an appearance not unlike an aircraft carrier, fans were blown away by these Star Wars ships.

The dagger-shaped ships were used by the Galactic Republic, Galactic Empire, and the First Order. Impressive ships hefting plenty of firepower and space for a sizeable crew, there are many classes of Star Destroyer.

Darth Vader himself flew one in the original trilogy, though the Executor was larger and more well-equipped than some of the other prototypes. The models that have appeared in Star Wars films over the years range from the common Imperial-class Star Destroyer to the far rarer crossbow-shaped Onager-class Star Destroyer.

Though they may not have the firepower of a Star Destroyer or the sleek appeal of the Upsilon-class shuttle, X-Wings have been a mainstay of Star Wars ships since the beginning. These ships are easily recognizable by their distinctive S-foils, which resemble the letter X when fully extended.

Equipped with four laser cannons and proton torpedo launchers, these single-pilot ships were intended for long missions and dog fighting–yet Luke Skywalker was able to take a precise shot from an X-Wing to destroy the Death Star. Considering that the X-Wings have played major parts in a number of battles over the course of decades, it’s no wonder these are some of the most popular Star Wars ships.

Nearly as iconic as the X-Wing or TIE fighter is the Y-Wing. Introduced in A New Hope, these Y-shaped vessels house a pilot on one side and a gunner on the other. Popular due to their built-in hyperdrive and overall durability, these crafts have been used since before the rise of the Empire.

Versatile star-fighter bombers, these ships proved themselves over the course of several major battles. Though not quite as maneuverable as an X-Wing, the larger Y-Wings are surprisingly quick and capable. Equipped with turrets and fixed guns, they are quite efficient at shooting down enemy star-fighters. A larger carrying capacity also allows for these vessels to transport heavier weaponry like proton torpedos or electro-proton bombs, which is why Y-Wings are often used as bombers.

The bizarre shape of TIE fighters initially baffled Star Wars audiences by going against everything we know about spacecrafts. This also ensured that they would stick in our minds permanently, as most fans can instantly recognize the familiar wail of a passing TIE fighter. Interestingly enough, this sound was created by combining the sound of a car on a wet road with an elephant’s scream.

These handy little Star Wars ships have been in use since the earliest days of the franchise. TIE fighters aren’t necessarily the strongest ships in the galaxy, but being cheap to produce and simple to fly makes them perhaps the most plentiful. The primary weapons of these crafts are a set of L-s1 laser cannons, though they have the capacity for heavier weaponry.

Given the compact size of the TIE fighter, the ships don’t come with all the bells and whistles of larger crafts. TIE fighters don’t have hyperdrives, landing gear or even life support. They were designed to attack en masse, trading durability and power for overwhelming numbers.

Though the Lambda-class T-4a Shuttles may not be as instantly recognizable as TIE Fighters, these tri-pointed ships are still staples of the Imperial army. Reliable enough to transport high-ranking officials like Darth Vader and Emperor Palpatine, the spacecrafts were typically used for transporting troops.

The three wings all serve a purpose, with a center dorsal wing that serves as a stationary stabilizer along with two moveable flanking wings. These shift downward when in motion but fold upward before the ship lands, creating a sleek and distinct triangle-shaped silhouette.

These vessels can be flown by a single pilot, but are often accompanied by a co-pilot or navigator on long trips. Lambda-class shuttles are equipped for long flights, with a hyperdrive and plenty of space to ferry around troops. These Star Wars ships are also remarkably well-armed, with twin forward-facing laser cannons, two wing-mounted double cannons, and a retractable double cannon mounted on the rear. There isn’t an angle on this ship that isn’t protected.

One of the sleekest vessels on this list, the N-1 Naboo Starfighter displays all the best elements of Naboo design. Aerodynamic, bright, and oh-so pretty–these ships were primarily used for reconnaissance and system defense, when they weren’t being paraded around for ceremonial functions. The N-1 Naboo Starfighters first appeared in Phantom Menace, as a prime example of the quality of ship that was widely available before the Dark Times struck.

Light and quick, these Star Wars ships could have easily been used in a similar fashion to the far more common X-Wing. But unfortunately, due to their design, Naboo Starfighters are at a disadvantage in tight spaces or during ground fighting. Hyperdrive, life support systems, and deflector shields are all common additions to these advanced ships, with two laser cannons adorned on each side and 10 proton torpedos. With so much power packed behind a quick, maneuverable design, its no wonder these ships were considered nearly flawless.