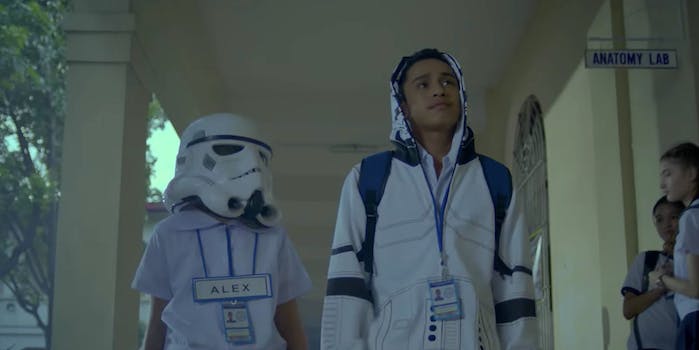 Feel the force of this incredible ‘Star Wars’ campaign to #CreateCourage

Everyone needs a stormtrooper group hug once in awhile.

But it’s also about triumph over adversity, both in the galaxy far, far, away—and here on Earth. Ahead of Rogue One, Star Wars is participating in a #CreateCourage campaign as a charitable effort to help the kids at the Philippine General Hospital.

Just watch this heartwarming commercial for the campaign that features a young stormtrooper who refuses to take off his helmet, and oh no here come the water works.

Can we all get a group hug now?

Star Wars fans around the globe are a generous bunch, from the 501st Legion that frequently visits children’s hospitals in costume to Lucasfilm’s Force for Change charity auctions.

You can support the effort by sharing your own #CreateCourage stormtrooper photo on social media (with a change to win prizes!) or donate to the Philippine General Hospital here.