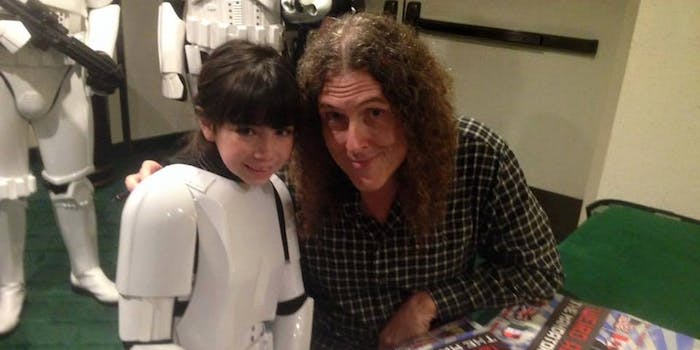 She’s got the Empire on her side now. And Weird Al.

An 8-year-old girl faced with the dark side of childhood after showing her love of Star Wars outwardly found plenty of support from a very special set of stormtroopers and “Weird Al” Yankovic himself.

Layla Murphy is a big Star Wars fan. Like many, she fell in love with the series after she discovered her father’s old toys laying around her home in Norfolk, Virginia. Like many fans both young and old, she wanted to display her love of Star Wars and other sci-fi movies such as Guardians of the Galaxy through her clothing and accessories.

But according to a recent report from CNN, she started to face cruel comments from classmates after moving to a new school. Eventually, Murphy started to withdraw and asked her mother not to wear any of her geeky clothing or her R2-D2 backpack. She’d gotten comments from girls at her new school who said she couldn’t like Star Wars because it was for boys.

Murphy had recently met Jason Tuttle, a member of the 501st Legion—an organization that performs charitable acts such as visiting sick children in the hospital, promoting the use of costumes, and getting people interested in Star Wars—and so her mother, Nicolette Molina, alerted Tuttle of Murphy’s situation. Touched by the story, Tuttle organized an effort for other members of the 501st Legion to send Murphy trading cards and notes.

“A lot of the Star Wars community and fans are supportive, and a lot of the females can relate and had similar experiences in their own childhoods,” Molina told CNN.

To top it all off, Murphy got a chance to meet Yankovic at a recent concert in her stormtrooper costume while surrounded by her squad.

Murphy is now a much happier girl and relishes the opportunity to surprise people in her stormtrooper costume who think she’s a boy behind the mask. She now proudly carries her 501st Legion trading cards and wears a Chewbacca backpack, demonstrating that the stormtroopers will always have her back.