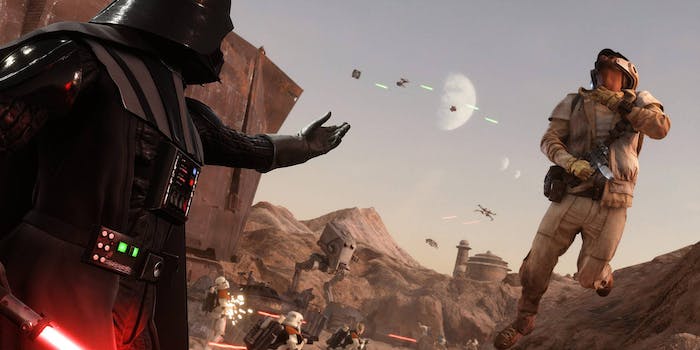 So far, the first game only includes one planet from 'The Force Awakens'.

A sequel to Star Wars Battlefront is already in the works, and it’s going to include content from the new movies.

After Battlefront‘s success last year, it’s no surprise that Electronic Arts is following up with a series of sequels, the first of which the company officially confirmed Tuesday. The main question now is whether it will be released in 2017 or 2018.

EA CFO Blake Jorgensen said that Battlefront 2 is due out “next year,” but since he revealed the news during an earnings call, it’s unclear whether he was referring to the next fiscal year (2018) or the next calendar year.

According to Gamespot, Jorgensen also revealed that the new game will include “bigger and better worlds” from the new movies, although he didn’t specify whether this will involve unseen content from Rogue One and Episode VIII, or just The Force Awakens. (The first Battlefront game, released in November 2015, mostly focuses on characters and locations from the original trilogy, although a free expansion adds in The Force Awakens planet Jakku.)

With that in mind, we’re now expecting months of fan theories about Star Wars spoilers hidden inside Battlefront 2. We predict that none of them will pan out (or at least, none of them will include meaningful information about upcoming movies), but that definitely won’t stop people from trying. Fans gotta theorize.