Star Wars Battlefront nails the look, sound, and feel of the movies

A hands-on look at what could be the best Star Wars simulation game yet.

I broke through the Rebel base on Hoth and began slaughtering the Rebels alongside my fellow Imperial Snowtroopers. This was finally the Star Wars movie experience I was waiting for.

Usually I’m skeptical when I see the first hands-off reveal of a game “in-engine,” i.e. what the game will actually look like versus a cinematic designed to make the game look good. About a minute into my first demo of Star Wars Battlefront, I realized it was time to consider trusting those early videos.

I had two demos of Battlefront at E3 on Wednesday. The first was a two-player co-op mode that took place on the desert planet of Tatooine. One other Rebel trooper and I had to hold off six waves of Imperial forces before we could be evacuated.

I didn’t shoot the first Stormtrooper I scoped in on because I had to take a long, close look at him before pulling the trigger. I’d seen some cosplayers in Imperial Stormtrooper armor walking the halls of E3 earlier that day. Photorealism may be easier to pull off when developers aren’t dealing with the nuances of facial expression, but that takes nothing away from how damned good those Stormtroopers looked compared to the “real thing.”

The play mechanics were typical first-person shooter fare. A primary weapon (blaster pistol), a secondary weapon (grenade launcher), and a jet pack defined my arsenal. The co-op mission was only training for the multiplayer match I tried next, and that’s when shit got real. 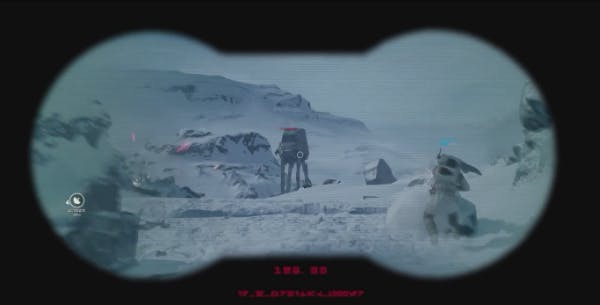 The Walker Assault demo was a competitive player-versus-player match that recreated the Battle of Hoth from The Empire Strikes Back. The Imperial team had to escort a pair of AT-AT walkers as they assaulted the Rebel lines, and the Rebels had to use Snowspeeders and call in starfighter support to take the walkers down.

The Star Wars Battlefront series has always been about trying to recreate the feeling of an epic Star Wars battle scene. The graphics have never been good enough to pull off the illusion. The movement was never smooth enough. Eighth generation consoles and gaming PCs are up to the task, however. Believe those in-engine demos, and captured game footage. They are precisely what I was thrown into.

I’m enough of a Star Wars geek to know my weapons, like BlasTech E-11 carbines, A280 blaster rifles, DH-17 blaster pistols, and I’ll stop right there because you may not know what the hell I’m talking about. My point is these were some of the weapons options I wanted to take into the field.

Battlefront got every single one of them right. They looked as perfect as I’ve ever seen them. DICE was given access to the LucasFilm prop archives in order to get the little details correct, and it shows. 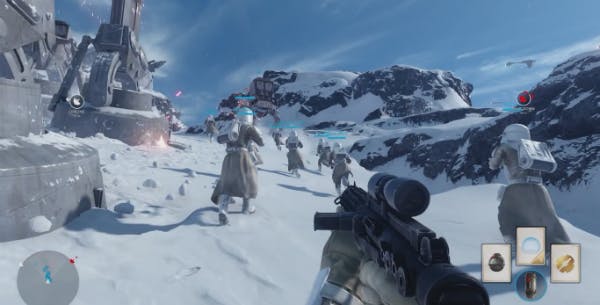 Our assault against the Rebels began outside an entrance to one of their hangar bays. The other Snowtroopers and I worked our way down one of the trenches where Rebels fought in The Empire Strikes Back. Blasters don’t have ammo in Battlefront, instead they overheat after firing too many rounds and have to be vented to cool off. It forces the same delay as a reload, but psychologically makes it easier to try suppressing the enemy so as to cover your squadmates.

The scene felt so cinematic that I resented one of the key mechanics in the mission: little floating Imperial sigils on the map that when collected provided bonuses for our faction. Each hologram-like sigil was a reminder that I was not, in fact, in a recreation of the Battle of Hoth. The simulation was so good that I wanted to forget I was playing a video game, versus acting out a scene from Empire.

That feeling of recreation was most palpable after we pushed the Rebels back from the hangar, which was one of their spawn points. I flanked the position and slaughtered the few Rebels who tried to make a break out of the hangar, and joined the Snowtroopers who poured into the breach.

There we were, inside the hallways carved out of the ice in the Rebel base on Hoth. That the Empire was winning sold the scene, but I was entirely lost in the illusion when we broke through to the other side of the base, and emerged onto a wide plain criss-crossed with Rebel trenches and blaster turrets.

The shield generator protecting the Rebel base was off in the distance, to my left. Rebel troopers were shooting from cover. I saw one of the AT-AT walkers pouring fire into the enemy. I heard TIE Fighters screaming overhead, and ran from the blaster fire of an X-Wing as it swooped down on us before heading back on a path toward the objective I and the other Snowtroopers had to seize from the Rebels. 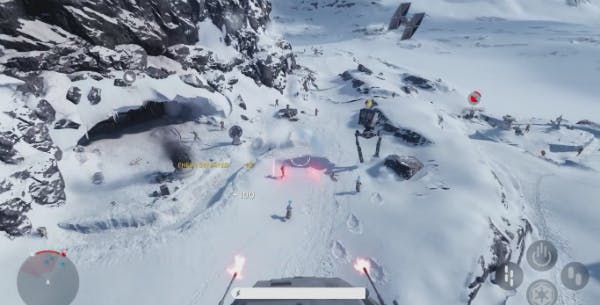 The assault on the Rebel base, from an AT-AT’s point of view.

The caveat to all of this is that the Walker Assault demo is a technical demonstration. It’s a proof that all of the in-engine reveal footage is to be taken seriously.

The shine of advanced graphics fades quickly, and fighting The Battle of Hoth on the same map will get tired for Star Wars Battlefront players who pick up the game for the combined-arms fighting they’ve been missing since Battlefield dropped the ball. This dilemma is going to hold for all the environments players will have access to in Battlefront. And Star Wars fans won’t take long to take for granted the quality of Battlefront’s cinematic illusion, either.

We need to see all of the different modes Battlefront has to offer and the different maps to get any idea as to whether Battlefront will have legs as a first-person shooter. Gamers will still be smart to be wary of server stability when Battlefront is released. The early adopters are going to hit this game hard after picking it up on day one, and any shortcomings on map variety will be elucidated very quickly.

Battlefront’s production values are beyond reproach. I think DICE would be making a mistake to rely on them as the primary motivation for anyone to purchase the game, but if the number of levels and the variety of play modes in the final release are satisfying, Electronic Arts is sitting on a huge hit with Star Wars Battlefront.