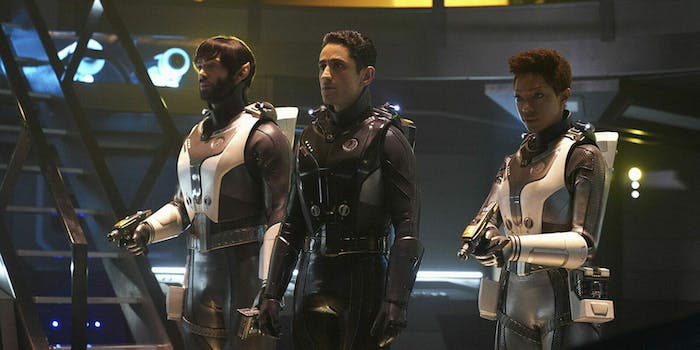 Pike seals his own fate in this week’s ‘Star Trek: Discovery’

This episode may be the best classic 'Star Trek' callback to date.

This recap includes spoilers for Star Trek: Discovery episode 2×12, “Through the Valley of Shadows.” For more Discovery recaps, click here.

Curses upon Star Trek: Discovery for making us care about Christopher Pike. Originally a rather unlikeable figure, Anson Mount transformed Pike into Star Trek fandom’s lovable dad, a wholesome hero who shares an affectionate yet respectful rapport with his crew. It’s easy to forget where his future lies, but this episode was a harsh reminder of Pike’s later life. Destined to suffer a horrifying accident in the line of duty, Star Trek’s Original Series showed him living with full-body paralysis and extensive radiation burns.

Last week: Did Star Trek: Discovery just tie into The Next Generation?

This obscure piece of 1960s canon reared its head thanks to (what else?) another Red Signal. Drawing Discovery to a Klingon monastery, the latest signal gave Pike an opportunity to get his hands on a Time Crystal, an essential tool for defeating Control. Why Pike, you may ask? Well, that’s because Ash Tyler—the obvious choice for a Klingon mission—recently faked his own death, a key detail that I totally forgot until this episode. Not only is Tyler forbidden from revealing his existence to any Klingons, but this monastery is the home of his secret infant son.

Pike beams down to meet a Klingon time guardian—who is, it turns out, Tyler and L’Rell’s son, grown to adulthood thanks to the presence of Time Crystals. He’s predictably resistant to a random human borrowing one of their holy objects, but he permits Pike to attempt a ritual test. If Pike can face a vision of his own future, he can take a crystal, thus sealing his fate forever.

Pike is horrified by what he sees, but as a Starfleet captain, he stands fast and reiterates his dedication to “service, sacrifice, compassion, and love.” It’s a very Original Series kind of dilemma, and in some ways more heroic than Kirk’s seat-of-the-pants brand of self-sacrifice. With full consideration, Pike chooses to sacrifice his body and career to save the galaxy, volunteering for a debilitating injury that could happen at any time. In a show that arguably features too many ties to old canon, this was one of my favorite callbacks so far, adding more emotional weight to Pike’s now-inevitable future.

Meanwhile on Discovery, Spock and Michael team up to find a missing Section 31 ship. Flying a shuttle to its last known location, they discover that it’s now a floating graveyard. The ship itself is intact, but only one life sign remains: Kamran Gant, a background figure from Michael’s tenure on the USS Shenzhou. This should’ve set alarm bells ringing, but I’m a credulous fool, so I was genuinely surprised when Gant turned out to be Control. To be precise, he’s a reanimated corpse full of Control’s nanobots. At this point, if Control isn’t the Borg, then the show is totally trolling us. Because seriously, this nanobot zombie cyborg is clearly a proto-Borg.

Control lured them here to possess Michael’s body, but it didn’t account for Michael’s newly mended relationship with Spock. While they technically buried the hatchet a couple of episodes ago, the thing that really sealed the deal was the return of Michael’s mother, forcing Spock to sympathise with Michael for the first time in decades. They actually have a functional relationship now, albeit with an amusing frisson of sibling bickering. Anyway, after a cool fight scene with Control (whose superhuman strength is legit), they escape by magnetizing the nanobots to the floor. But they return home to some bad news. Control has now spread across the Section 31 fleet, outnumbering our heroes 13 to one. There’s only one way to stop Control from stealing the data archive: destroy the USS Discovery.