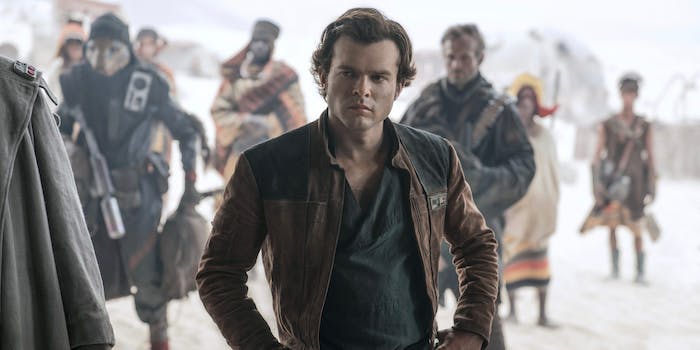 It's essential reading for 'Solo' fans.

To celebrate the digital release of Solo: A Star Wars Story, screenwriter Jon Kasdan is revealing plenty of behind-the-scenes details about what went into making the film.

No matter how you felt about Solo—and Kasdan acknowledged that it didn’t work for everyone—he offers an incredibly fascinating insight into the process of making the movie. It’s full of praise for the cast, the mood behind some of the film’s biggest scenes, what worked best for him, and what changes happened along the way. It also points out that at least a couple of connections to the original trilogy was intentional. For instance, the sudden appearance of Beckett (Woody Harrelson) at the end of the film was a mirror of Han’s big moment at the end of A New Hope: While Han came in to save Luke, Beckett returned for a betrayal.

And the callback to Return of the Jedi? Leia was more than familiar with at least one story from Han’s childhood.

“OF COURSE Han told Leia the story of how he and Qi’ra broke out of the Den of the White Worms and that’s what gave Leia the idea to pull a real thermal detonator when disguised as the bounty hunter Boushh in Jabba’s Palace in ROTJ,” he wrote.

In honor of the digital release of #SoloAStarWarsStory & in lieu of a commentary, here are 53 random factoids & notes about the making & writing for anybody who's interested. If you haven't seen the movie yet… maybe watch it before reading? Anyway, enjoy the movie & #MTFBWY pic.twitter.com/wHy1seDuoL

Given the tumultuous behind-the-scenes issues that resulted in the firing of original Solo directors Phil Lord and Chris Miller, and Ron Howard replacing them, fans have long been curious about who made what decisions and which shots were Lord’s and Miller’s versus Howard’s; according to a Wall Street Journal report, Howard reshot about 70 percent of the film. While Kasdan doesn’t hash out that particular aspect, he does give Lord and Miller (who are referred to by C&P in his notes) credit for several of the film’s choices, including Han Solo and Chewbacca’s first meeting in the mud pit—and Han speaking Shyriiwook at a vital moment—and making Chewbacca “the beast.” Lando’s cape closet was also a touch from Lord and Miller.

Like other Star Wars films, Solo was inspired by and homaged plenty of other properties. Among them, Kasdan cited Bram Stoker’s The Lair of the White Worm, The Godfather Part 2, McCabe & Mrs. Miller, the covers of the 1980s Marvel Star Wars comics he saw at his grandparents’ house, and Bruce Springsteen’s memoir Born to Run.

Kasdan praised several members of the cast, including Donald Glover (Lando Calrissian), Paul Bettany (Dryden Ros), and Erin Kellyman (Enfys Nest). It was apparent to him and everyone who saw Glover’s screen test that he would be a scene-stealer, and Kasdan would love to see more of both Lando and Enfys Nest in future movies.

He also acknowledged some of the film’s failures. He was fascinated by how divisive Elthree (Phoebe Waller-Bridge) was among fans, noting that she was formed from conversations about how the bartender on Mos Eisley in A New Hope had a big prejudice against droids in his bar. Looking back, he called Thandie Newton “too good and too interesting as Val,” and although her character was always meant to die so that Beckett had to trust new crew members, “Thandie is so compelling to watch that the death of her character feels a little like a cheat.”

Kasdan also hears you on one of Lando’s big moments.

“Would the movie have made more money if it had just been two hours of Lando dictating his memoirs into his holorecorder?” Kasdan wrote at one point. “Perhaps. You live and learn.”

And he’s upfront about the unlikely possibility, given the box office performance of Solo (particularly internationally), of getting a sequel in the near future. But he’s hopeful that one day he’ll be able to tell more of Han and Qi’ra’s story because it’s far from over.

“Given the way Hollywood, and the culture at large, seem to run away from anything labeled a disappointment, the odds seem like they’re against it happening anytime soon,” he wrote. “But, I suppose, Han wouldn’t have it any other way.”