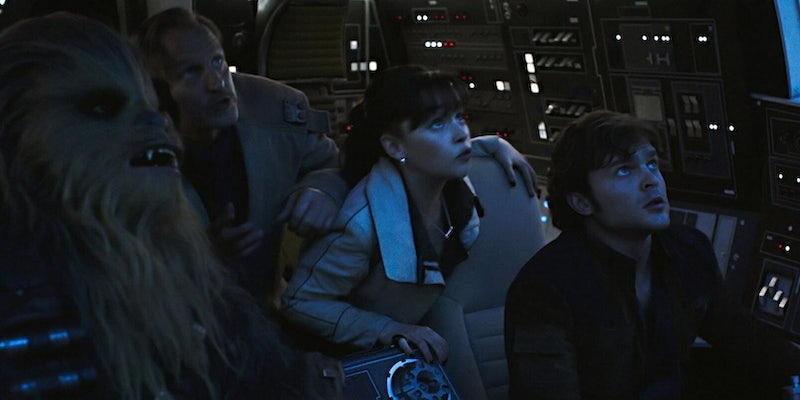 ‘Solo’ is really struggling at the box office

With Solo: A Star Wars Story getting lukewarm reviews—it’s also been called a “so-so” flick—the latest film in the four-decade-old franchise isn’t performing so well at the box office.

According to Exhibitor Relations, the three-day total for Solo is estimated to be $83 million domestically. By Memorial Day on Monday, it’s estimated that it will have taken in $101 million.

Well, according to Business Insider, the studio projection, as of last week, was that Solo would earn between $130-$150 million during the Memorial Day weekend.

Consider that Rogue One took in $155 million in its opening weekend in 2016 and that, counting inflation, the second episode of the series, Attack of the Clones, opened at $126.1 million in its first three days in 2002.

One potential issue for the movie was when it was released. Perhaps Memorial Day wasn’t the ideal time.

think the 'Solo' box office would have been stronger had it opened in December. Disney has shown Star Wars movies in December can make tons of $. While 'Star Wars' is popular, it's not Marvel, which could release a movie every 3 months and make crazy money. https://t.co/z9rRoodZSw

But the mediocre reviews probably haven’t helped either.

As the Daily Dot’s Gavia Baker-Whitelaw wrote in her review, “Despite a strong performance from Alden Ehrenreich, Solo feels unnecessary—and I say this as someone who secretly believes there’s no such thing as a bad Star Wars movie. When I rewatch the prequels, with all their terrible dialogue and dubious CGI, I still sense a kernel of genius within. The sweeping mysticism of the Jedi; the creeping tendrils of the Empire’s backstory. With Solo, I see a competently made blockbuster with nothing at its core. The creative infrastructure of Disney and Lucasfilm means we’re still treated to gorgeous costumes, cool aliens, and crowd-pleasing callbacks to earlier canon. Unlike Rogue One—which had its own behind-the-scenes issues—Solo doesn’t light that spark of imagination.”

The move also seems to be struggling in at least one other country. In China, via the Hollywood Reporter, Solo finished in third place with a $10.1 million opening.