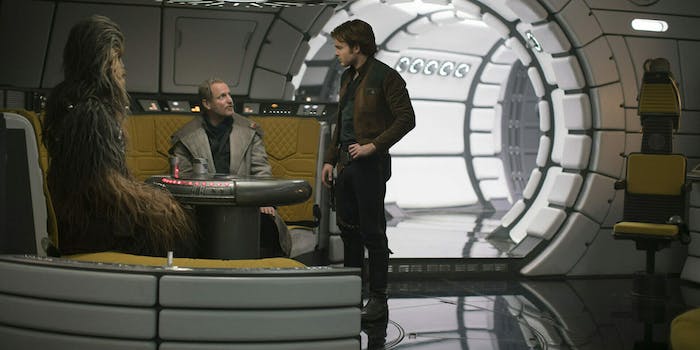 Why ‘Star Wars’ is no longer essential viewing

This post includes spoilers for Solo: A Star Wars Story.

In my initial review, I described Solo as “unnecessary.” Not terrible, but simply not worth making into a $300 million movie. It doesn’t feel like essential viewing, which may explain its poor box office performance. The Star Wars franchise occupies a unique role in pop culture, fueled by nostalgia in a way that Marvel’s ubiquity can’t hope to achieve. But Star Wars is iconic—Solo isn’t.

As a Star Wars fan, I thought Solo was an underwhelming concept with lackluster execution. But most Star Wars patrons aren’t die-hards. They’re casual viewers who have better things to do than painstakingly analyze a sci-fi franchise. So why did they turn up their noses at Solo, when worse blockbusters routinely become smash-hits? The answer may have more to do with Solo’s overall concept than its quality as a film. The premise feels more suited to a tie-in novel than a movie, and most people aren’t interested in tie-in novels.

Star Wars fans consume tie-in media by the boatload. The old Expanded Universe became a fandom touchstone in the years after the original trilogy, introducing a massive unofficial canon of spinoff stories. Disney’s new era is less experimental than the often bizarre EU, but it still has plenty to offer. Comics like Poe Dameron and novels like Last Shot flesh out the supporting cast, accompanied by reference books packed with background detail. It’s a successful model for multimedia storytelling, but it has a completely different appeal than the main movie franchise.

Instead of offering a meaningful story, Solo answers a series of trivia questions. How did Han and Chewie meet? How did Han get his blaster? Did he really make the Kessel Run in less than 12 parsecs? In a normal Star Wars movie, these questions are a kind of garnish. For Solo, they’re the main course. The problem is, most people don’t care about canon trivia—and the ones who do are already buying tie-in books. It’s the opposite situation to Rogue One, which marketed itself as a missing link in Star Wars canon but delivered a powerful standalone story.

While Star Wars holds an inherently nostalgic appeal, Solo misunderstood what that means. The last three movies succeeded because they combined vintage Star Wars nostalgia with something fresh. Solo just returns to something we’ve seen. People already know Han Solo, and his story ended with The Force Awakens. Solo’s box office returns confirm that audiences aren’t very interested in exploring his earlier years. Despite being a safe choice with mass appeal, Solo is much less popular than the bold and innovative Last Jedi.

This misfire is best illustrated by Solo’s surprise cameo in the final act. After killing the crime boss Dryden Vos, Qi’ra takes over his operation and contacts his secret benefactor. It’s meant to be a cameo on the same scale as Rogue One’s Darth Vader scene, but it falls flat. Darth Maul? Really? To most viewers, this guy died in The Phantom Menace. Fans of the animated shows Clone Wars and Rebels know how he survived, but that’s a small fraction of the audience. When Solo’s screenwriters talk about Maul, they use phrases like “narrative richness,” “long journey,” and “freighted with baggage.” This just doesn’t reflect most people’s experience of the character: a crowd-pleasing stunt villain from one movie 19 years ago.

More to the point, Maul’s cameo doesn’t add anything to the story. Does Dryden Vos need a secret boss? No. Does Darth Maul actually do anything? Also no. There’s speculation that Disney is teasing Maul’s return in a later spinoff, but once again: Star Wars isn’t Marvel. It doesn’t need cameo teasers. If the creators want to bring back Darth Maul, they can introduce him in a story where he has an actual role. Not here, where his unexplained resurrection is jarringly confusing.

If you responded to Solo with a resounding “meh,” it may be time to get used to that feeling. Disney’s next confirmed Star Wars spinoff is a Boba Fett movie, revisiting old haunts once again. Another attempt to cash in on a fan-favorite character whose story may not warrant a whole movie to itself.