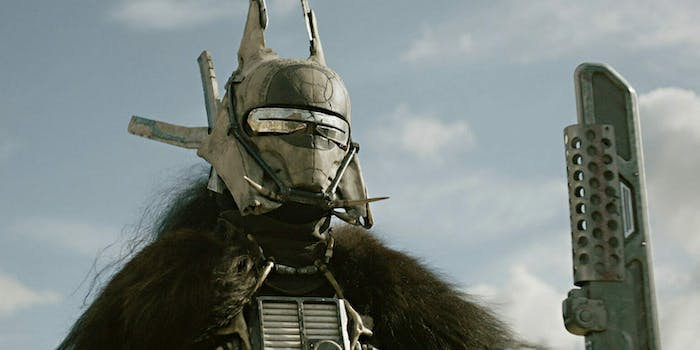 Enfys Nest was the breakout character of Solo: A Star Wars Story, introduced as a secondary villain like Boba Fett or Captain Phasma. Like both of those characters, she wore a cool mask for most of the film. Unlike them, she eventually took it off to reveal a surprising secret identity.

Admittedly, “this badass character was secretly a woman all along” is a tired trope. Should it really be a shocking twist that a girl did something cool? If we’d known since the beginning, it might have ameliorated the annoyance of Solo treating one of its female leads as disposable. But despite all that, Nest remains an intriguing character.

At first, we believe she’s the fearsome leader of a rival criminal gang. Her team, the Cloud-Riders, try to steal the same haul as Tobias Beckett. Then when they return in the film’s final act, we learn their true motives. Rather than just being thieves, they’re idealists who steal supplies for Rebel forces. Enfys Nest is a young woman, disguising her voice with a vocoder.

The Cloud-Riders are one of several callbacks to Star Wars‘ old Expanded Universe, referencing a 1977 comic book. Screenwriter Jonathan Kasdan described them as “a riff on the idea of a Star Wars biker gang,” although the original Cloud-Riders weren’t quite so heroic. Enfys Nest is an entirely new character, created for Solo.

Nest is played by 19-year-old British actress Erin Kellymen, whose next role is Éponine Thénardier in the BBC’s Les Miserables miniseries. Since her identity had to be kept secret before the movie came out, she didn’t appear on the promotional tour.

While Nest’s backstory remains a mystery, we can learn something from the official Solo guidebook. For instance, if you rewatch the movie, you should pay attention to the Cloud-Riders’ combat technique. Many of their weapons are geared more toward capture than killing, hinting that they’re less destructive than they appear.

The Cloud-Riders live on a ship called the Aerie, which rarely lands because their swoop bikes can launch from high altitudes. This means they’re constantly on the move, disguising their identities and motives behind the image of a ruthless gang of thieves. Their swoop bikes are basically “engines with seats”—powerful vehicles that require serious confidence and skill to control.

Featuring elements from numerous planets, the Cloud-Riders’ clothes make them impossible to identify beyond “humanoid.” Nest’s costume incorporates Narglatch fangs from the planet Orto Plutonia, Mandalorian armor plates, and a Ubese helmet. That’s the same kind Leia used to disguise herself in Return of the Jedi. Even her combat skills are hard to pin down, displaying a wide range of styles.

If we can discern anything from Nest’s appearance, it’s that she’s image-conscious. Instead of creating a nondescript disguise, she designed a memorable public persona. On top of the intimidation factor, her clothes also feature some personalized details. Much like an X-Wing pilot, she decorated her helmet to reflect her interests. Across the forehead, you can read a faint extract of poetry: “Until we reach the last edge, the last opening, the last star, and can go no higher.” The black circle design on her faceplate is a reverse eclipse, symbolizing the idea of shining light in a dark place.