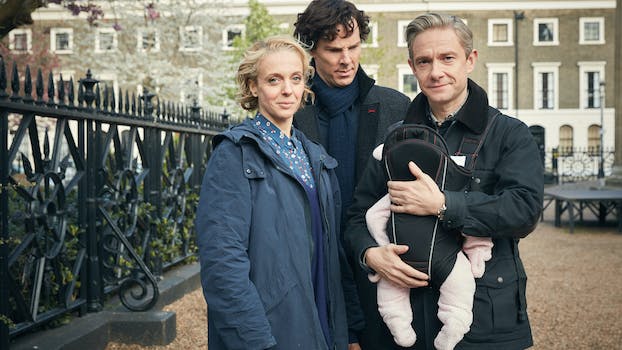 No one saw this coming.

This review includes major spoilers for “The Six Thatchers.”

Sherlock is consistently inconsistent, veering between compelling drama (Sherlock’s death at the end of season 2) and self-indulgent nonsense (“The Abominable Bride“). The fourth season premiere, “The Six Thatchers,” is the first time it’s managed to be boring.

Even at its worst, Sherlock usually maintains a palpable sense of fun, energetically propelling itself from one plot twist to another. This time around, fast-paced storytelling was fully replaced by Sherlock‘s trademark flashy editing and love of montages. The main characters don’t even seem to enjoy each other’s company anymore, a fatal flaw in what basically reduces Sherlock to a buddy-cop show.

Following its brief foray into the Victorian era, Sherlock returns to its original alternate reality: a world where almost everyone in London is white, and Sherlock Holmes can blithely shoot people without consequence. Murder charges quickly forgotten, he embarks on a case inspired by the classic Holmes story The Adventure of the Six Napoleons, retitled “The Six Thatchers.” Someone has been breaking into people’s homes and smashing statues of Margaret Thatcher, although for some reason the show never acknowledges the most obvious explanation for this crime: Lots of people really hate Margaret Thatcher, to the point where some celebrated her death by burning her in effigy.

As in the short story, the real explanation is that something was hidden inside one of the statues, in this case a memory stick about Mary Watson’s days as a spy/black ops specialist. In the classic vein of spy stories told by excitable 10-year-old boys, Mary (Amanda Abbington) is allegedly a hyper-competent badass, but her characterization makes no sense whatsoever. Why keep a memory stick full of top-secret information about you and your colleagues, an item clearly begging to be stolen and used against you? And if she’s so impressive, why do John and Sherlock constantly undermine her abilities by trying to “protect” her? We’re even treated to a long and pointless montage where she assumes several false identities and travels the world undercover, only to find John and Sherlock waiting at her destination because they planted a tracker on her before she left.

In the episode’s final showdown, Mary died as she lived: fueling character development for the men in her life.

Mary Watson has a tricky role in any modern Holmes adaptation, a wife who was barely more than an afterthought in Conan Doyle’s short stories. To avoid characterizing her as a buzzkill or a third wheel, Sherlock went all-out and turned her into a superspy. A superspy who abandons a life of peril and adventure for John Watson and a marriage that already seems dull and passionless after three episodes.

“The Six Thatchers” does a disservice to all three of the lead characters. Mary’s death is a classic example of fridging, arranged to create as much conflict as possible for the male leads. Benedict Cumberbatch is uncharacteristically lackluster as Sherlock, with writer Mark Gatiss failing to deliver the snappy dialogue we’ve come to expect. Sherlock and John’s banter proceeds on autopilot, with no vitality or meaningful friction until Mary’s death splits their friendship apart. But while Sherlock and Mary were certainly shortchanged, John’s characterization is unforgivably bad.

It’s time to talk about the inexplicable subplot where John Watson sexts a woman he met on the bus.

In season 1, Sherlock introduced an interesting new interpretation of John Watson, a character who is often written as a buffoonish sidekick to Holmes’s prickly genius. Martin Freeman‘s version is sharper, an army veteran who is ultimately a good man but is nowhere near as nice and cuddly as his knitwear-clad exterior implies. His key qualities are his thirst for adventure and his wholehearted loyalty, both of which are extinguished in “The Six Thatchers,” possibly by mistake.

Yes, it’s time to talk about the inexplicable subplot where John Watson sexts a random woman he met on the bus.

Mary’s death should be the most memorable scene in the episode, but it’s overshadowed by John’s wildly out-of-character flirtation with the Bus Lady. As a dreary story about an unpleasant man having a midlife crisis, it’s perfectly typical: a tired, middle-aged father strikes up a text-based relationship with a younger woman but ultimately decides not to follow through in person. But as an addition to John Watson’s characterization in Sherlock, it’s catastrophically inappropriate.

It’s hard not to see this entire subplot as a transparent example of middle-aged male wish-fulfilment. Apparently seduced by the sheer animal magnetism of a 45-year-old man who embodies the word “average,” an attractive young woman approaches John Watson on the bus and gives him her phone number. While not impossible, this scenario is a thoughtlessly bizarre role-reversal of the sexual harassment women experience on public transport. Then, there’s the fact that John is actually receptive to her advances, texting another woman while he lies in bed with his wife. He doesn’t even have the clichéd “excuse” of Mary neglecting him in favor of their new baby because they share the weight of child-rearing and both join Sherlock to solve crimes. So, we’re left with a new and thoroughly unlikable version of Watson, who will spend the next two episodes stewing with guilt about his not-quite affair.

Is this meant to make him seem relatably flawed, or is Sherlock finally acknowledging that all of its main characters are total dicks? Either way, it doesn’t make sense in the context of Watson’s previous characterization. He’s a dick, but not that kind of dick.

After the lengthy wait between new episodes of Sherlock, it’s hard to imagine anyone being satisfied by “The Six Thatchers.” Fans of John and Sherlock’s relationship have little to work with, and the next two episodes will be an uphill struggle for the two characters to mend their friendship. Fans of Sherlock‘s silly yet imaginative crime-solving will probably be disappointed, since the main crime is lifted directly from The Six Napoleons, and Mary’s storyline is full of plot holes. (Why, for example, did the anonymous Eastern European terrorists keep Mary’s former colleague Ajay in captivity for six years, when they could’ve just killed him? And why did the evil mastermind Vivian Norbury collapse beneath Sherlock’s unimaginative and sexist jabs about her status as an elderly cat lady, when she clearly used that persona to cover her Moriarty-like machinations at work?)

Leading into its fourth season, Sherlock has lost its way. Mary’s death means we’re unlikely to see the comedic atmosphere that drove episodes like “The Sign Of Three,” and even Martin Freeman and Benedict Cumberbatch—two of the BBC’s finest actors—often appear to be phoning it in. It may be interesting to see Sherlock finally grow up a little and learn to care for the people around him, but only if the show manages to recapture the panache of its first two seasons.