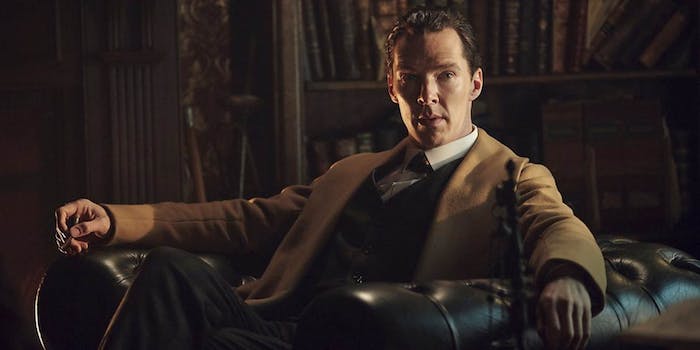 The show's ambitious self-indulgence is one of its defining traits.

This review contains spoilers for “The Abominable Bride.”

If Sherlock is an AU (alternate universe) fanfic of the original Sherlock Holmes stories, then “The Abominable Bride” was an AU of an AU.

Its Victorian setting raises interesting questions about what tricks the show might pull in the future—Sherlock in space, Sherlock in a coffee shop?—but it might have been better if its creators were more familiar with the common foibles of fanfic as a genre. For example, no one needed to see a barely altered rewrite of the pilot episode’s introductory scenes.

Like Inception, “The Abominable Bride” used the human mind as the setting for its mystery storyline. The Victorian premise was a drug-induced creation of Sherlock’s “mind palace,” a 120-year-old murder case that might hold the answers to Moriarty’s apparent return from the dead.

Since Sherlock eventually concluded that Moriarty was dead after all, the whole episode felt like an excuse for showrunner Steven Moffat to play around in Victorian England—one of his favorites in Doctor Who. Not that this was necessarily a bad thing, because Sherlock‘s ambitious self-indulgence is one of its defining traits.

The main problem was that once the mind palace plot twist was revealed, the episode stopped making any sense—a fact that several characters actually pointed out onscreen, hanging a lampshade on the problem. If the Victorian storyline took place entirely in Sherlock’s subconscious, how did this explain all the expository scenes where Sherlock is neither present nor aware of what’s happening? When we see things like Sherlock and John’s conversation about sex and relationships, are they meant to be a product of Sherlock’s own self-image, or a scene in their own right?

As with the more divisive episodes of recent Doctor Who, “The Abominable Bride” inspired a split within its audience. If you’re looking for a coherent plot then you’re in for a disappointment, but if you’re happy to watch a fast-moving adventure where clever people say funny things, then you’re probably fine.

Sherlock frequently engages with the commentary surrounding the show, including references to popular fan theories and even a handful of minor characters inspired by its own devoted fanbase. In “The Abominable Bride,” the most interesting fandom commentary reflected a long-running debate about Sherlock Holmes canon: Watsonian vs. Doylist interpretations.

A Watsonian analysis views the narrative from an in-universe perspective, treating Watson as a “real” (and potentially unreliable) narrator. This allows for a wealth of subtext within Watson’s writing, whereas a Doylist view examines each story as the invention of Sir Arthur Conan Doyle, with Watson’s narration as a straightforward framing device.

Sherlock rarely bothers with this debate in the traditional sense, because John Watson’s blog plays a minor role compared to the self-referential nature of the original short stories. However, the show does have a long history of playing with its own public perception in the media, and this episode went further by taking place inside Sherlock’s mind: the ultimate unreliable narrator.

With a year to wait until season 4, the holiday special gave fans a lot to chew on—particularly when psychoanalysing the lead character. If most scenes were the product of Sherlock’s subconscious, what does that mean? Sherlock’s affection for John Watson shone through at the Reichenbach Falls, but this was par for the course in their prickly but codependent relationship. There were plenty of other details that may tell us more about the inner workings of Sherlock’s mind.

Take Mycroft, who in Sherlock’s mind palace was depicted as obese and gluttonous, a callback to his appearance in the original Holmes canon. Many fans interpreted this as a facile joke, but it could also be evidence of Sherlock’s subconscious hitting his brother where it hurts: his weight. Sherlock frequently mocks the modern-day Mycroft for his weight-loss regimen, a stark contrast to Sherlock’s casual drug use. His aloof and self-destructive image of Victorian Mycroft is quite distinct from the character we see in the present day, whose controlled exterior hides a deep sense of affection and responsibility toward his brother.

Of course, not everything can be explained or enriched by this kind of Watsonian analysis. Looking at the role of women in the episode, it’s impossible to ignore its place in the canon of Steven Moffat and co-writer Mark Gatiss, lurching precariously between feminist buzzwords (“Votes for women!”) and moments like Sherlock mansplaining a suffragette murder plot to a room full of silent, masked women.

As a response to Sherlock‘s feminist critics, “The Abominable Bride” is nothing short of mesmerizing.

Over the past couple of years, Steven Moffat seems to have grown more aware of the public discussion about sexism in Doctor Who and Sherlock. The ninth season of Doctor Who saw female characters take a more significant role, with a couple of women writers finally joining the creative team. Meanwhile in Sherlock, we got an episode in which a cabal of Victorian women got away with murder because the Holmes brothers decided it was the right thing to do. (A detail that feels all the more bizarre if you know that their storyline was inspired by the Ku Klux Klan in the classic Holmes story “The Five Orange Pips.”)

“The Abominable Bride” is full of knowing references to the tertiary role of women in Sherlock’s life, such as Mrs. Hudson complaining that Watson always leaves her out of his stories in The Strand: “I’m your landlady, not a plot device.” But just like the times when characters pointed out that nothing made sense, acknowledging the problem didn’t actually make it go away.

In some scenes it felt like the writers were straining themselves to be as feminist as humanly possible, attempting to prove their detractors wrong. Unfortunately, there’s a significant difference between writing three-dimensional female characters, and having Mary Watson make an ostentatious comment about voting rights before disappearing from the story for half an hour.

Sherlock is now so far removed from the average TV series that it’s hard to judge what a “good” or “bad” episode would even look like. Cumberbatch and Freeman’s performances are apparently enough to carry the most nonsensical of unresolved storylines, and the show’s bizarre issues with gender and race never seem to hurt its ratings. Even an episode about a feminist KKK murder ghost hallucination receives five-star reviews.

Unlike Moriarty, Sherlock‘s popularity appears to be bulletproof.