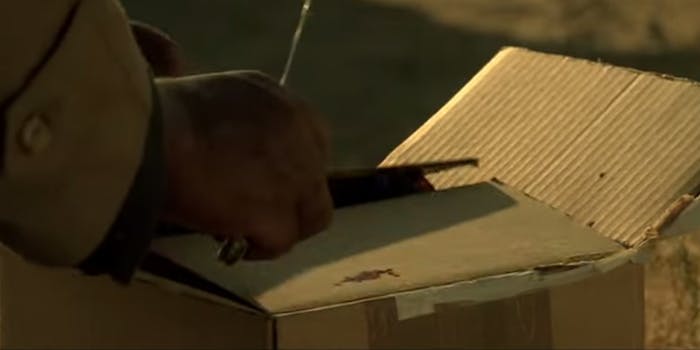 Enjoy three decades of manpain at the movies.

That’s not just Gwen’s head in the box—it’s generations of fridged women.

It’s been 15 years since comics writer and cultural critic icon Gail Simone first introduced to the world to the concept of “women in refigerators”—that is, the endless numbers of women who populate our narrative world for the sole purpose of being killed off in order to provide angst for a male character’s plot development. Named after the notorious manner in which one disposable comic book female was offed, Simone’s famous website documenting the trend has served as the lynchpin for conversations about sexist tropes in pop culture.

But conversations about comic book characters can be hard to carry over to other mediums, as Anita Sarkeesian knows all too well after her work examining this and other harmful tropes in gaming culture. Now, YouTube user Loosemeatz has given us a scathing visual compilation of fridged women in cinema as the trope plays itself out on an endless loop of dramatic plot angst and the tears of (mostly white) male characters.

While it’s a strong statement, the supercut is by no mean a complete compendium of the vast assortment of female characters whose narratives have rendered them expendable. But it gets a big advantage from its soundtrack—Pearl Jam’s cover of the iconic ’50s ballad “Last Kiss,” one of the most famous examples of the trope in musical form.

We recommend playing the Fridged Women drinking game for this. Drink especially hard whenever Mel Gibson’s manpain takes over the whole screen. Go for double shots whenever the death is extremely gruesome.

Actually, we suggest you start drinking at the beginning and just keep going.