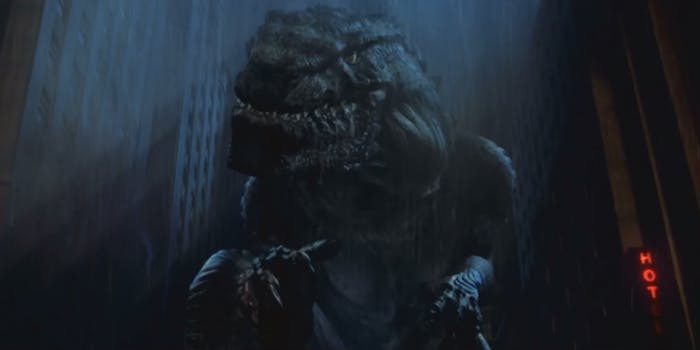 Rifftrax Kickstarts infamous ‘Godzilla’ romp for its next live performance

The phrase "you're gonna need a bigger theatre" comes to mind.

After movie-mocking comedy troupe Rifftrax achieved a milestone last year with its successful Kickstarter campaign to license a high-budget movie—originally billed as Twilight but ultimately the cult favorite Starship Troopers—it was just a question of time before they did the whole process again.

Now, as they prepare for their next Rifftrax live showing of the Internet favorite Sharknado, the team is turning to Kickstarter once more. And the stakes are bigger than ever. You could even say they’re monstrous.

Last night, the Rifftrax team announced a new Kickstarter campaign to do a live riffing of the 1998 Godzilla, a bad-movie behemoth currently sitting pretty on a 25% Tomato Meter rating. Godzilla is Rifftrax’s most-requested movie ever, which means, given that this is a community where awfulness is cherished, that it’s basically the Godzilla of terrible films. For the Rifftrax comedic team of Mike Nelson, Bill Corbett, and Kevin Murphy, who together helmed the twilight years of beloved bad-movie series Mystery Science Theatre 3000, this can only be a good thing.

Their fanbase obviously agrees. Within three hours of the campaign’s launch, the push had already received over $70,000 of its $100,000 goal thanks to the website’s devoted fans, who pushed the last Kickstarter to more than five times its original goal. At press time, that number had jumped to above $80,000, priming the project to reach its goal in its first 24 hours.

Rifftrax noted that the initial goal is just a baseline based on the high licensing fee for the movie. Additionally, this Kickstarter has one other significant change from the last attempt: there’s no risk of having to substitute another movie. Last time around, New Line Cinema wasn’t quite ready to place its most riffable property, Twilight, in the hands of the series’ sizeable, shall we say, ironic fandom. Godzilla studio TriStar has already agreed to let Rifftrax license the film provided it raises the money for the fee.

With the new ‘zilla reboot drumming up a revival of interest in the classic franchise, the timing is perfect to revisit this cheesy Roland Emmerich monster flick, which features over-the-top action sequences, the best of ’90s CGI, hammy performances from Matthew Broderick and Hank Azaria, and a giant T-Rex who cleverly plots to destroy the Chrysler Building.

Should the Rifftrax Kickstarter exceed its goal, everything above the initial $100,000 will go towards the production of the event itself. While Rifftrax can’t offer tickets as a reward, one of the rewards they are offering might be even better to die-hard fans: a re-riff of the classic MST3K short A Case of Spring Fever, which made the phrase “No springs!” into a cult fandom watchword.

If the Rifftrax funds, Godzilla will be the company’s twelfth live show. There’s no word on what the next show after that might be, but a glance at the top vote-getters from the Rifftrax community shows that Godzilla, Gojira, and giant dinosaur movies are all high on the list. Still, we can’t help but notice that Sony, the studio that owns TriStar Pictures, also owns the right to everything from Lawrence of Arabia to One Direction: This Is Us.

According to Rifftrax star Mike Nelson in a recent interview with the Daily Dot, Sony is amenable to donating more of its films to the Rifftrax treatment. “I think they saw that the sky didn’t fall and everything is fine.”

With the team’s second Kickstarter poised to reach its goal in under a day, it seems more like the sky’s the limit.